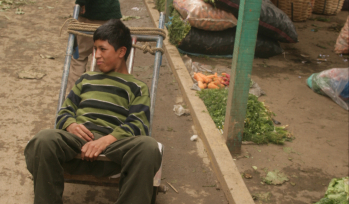 On a clear day in Morocco you can look across the Strait of Gibraltar and catch sight of the Spanish coast in the distance. Many Moroccan youth look to Europe with hope -- they dream of migrating there for a better life, for opportunities to learn and to work, and to join friends and family who have gone before them.  For some educated young women, going to Europe represents greater personal freedoms; it is also an escape for youth, from the boredom of everyday life and from diminished prospects for getting ahead at home.

I spent a year researching the way migration from a small Moroccan city is structured and challenged along gender and generational lines. Yet these dreams of migration are not peculiar to Moroccan youth. This year's International Youth Day theme highlights migration as a common response to inequality experienced by youth in low-income countries.

The focus on youth migration invites us to reflect on the ways in which some borders are porous, easing flows of music, taste, ideas and information through global media, tourism and technology. At the same time, some borders remain rigid, and young Moroccans wishing to leave their country come up against visa restrictions, financial barriers, gender hierarchies and restrictive border policies. Many of the young people I met in Morocco felt trapped.  'You didn't know you were coming to Alcatraz!', one young man told me when I first arrived, likening his city to a prison.  'Why', I was asked so often, 'would you want to come here?'

Looking to a better future: Moroccans praying on a patera bound for Spain[/caption] The drawing included here from a young person depicts the iconic image of a zodiac (or 'patera', the boats used to clandestinely cross the sea to Spain).  I heard these referred to as las pateras de la muerte ('death boats'), symbolizing the thousands of lives that have been lost in failed attempts to cross. On the other hand, the patera represents the individual will to overcome desperate conditions, including unemployment, poverty, and political oppression.  In the drawing, the aspiring migrants pray for their lives, the Spanish coast visible in the distance.

The Young Lives study has also been researching what migration means to young people, particularly within the context of childhood poverty and inequality. This work has been carried out with groups of children, under the age of 16, across four countries (Ethiopia, the state of Andhra Pradesh in India, Peru and Vietnam). Our findings highlight the importance of internal migration (within-country) for young people and the value of sibling and family networks for facilitating children's migration.

Children in our study relocate for a variety of reasons, sometimes alongside their families and sometimes on their own. Some of the children in Andhra Pradesh relocate without their families to distant residential hostels so that they can access better quality schooling provided by the government. This creates specific challenges for families when the children are unable to perform certain household tasks (such as help in the fields or around the house) when they return home because they do not learn these skills in the hostel. In one of our study sites in Vietnam, several of the mothers migrate to work in the city, whilethe children stay behind and so experience long periods of maternal absence.  And in places like Peru and Ethiopia, the relocation of children from poorer to better-off households (often from rural to urban areas) is a long-standing tradition in response to family crisis, parental death, acute poverty, and the desire for child companionship.

Fifteen-year old Natalia, in Peru, is well-connected, and she wants to move to the city where her sister now lives. 'There, I won't go to the fields anymore (laughs)'. Her mother wants her to continue studying and to go to the city, and referring to their village says, 'Staying here, there's nothing, there's no future here.' 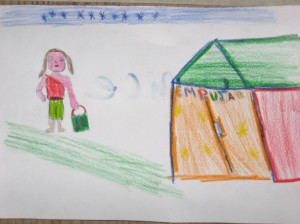 City dreams: for one rural 12-year-old girl in Peru, a good life would be shopping in Lima

In this picture (above), a 12-year-old girl from a village in Peru was asked to depict a girl, her age, for whom she imagined life was going well. In her drawing, she locates the girl not in her village but in Lima, the country's capital city, standing at the doors of Ripley, a major department store.There is no single definition of child or youth 'migration', and young people who never leave their localities may also be affected by migration - through their aspirations, when migrants arrive to their neighbourhoods and schools, or when those close to them decide to leave.

Young people require resources, information and networks to move, whether it be to the next biggest town or abroad. But poorer young people tend to have less access to these things, and some groups face greater barriers to migration. This is another way in which disadvantage and inequality are perpetuated among youth.

I hope the theme of this year's World Youth Day draws attention to the diversity of youth migration and to young people's varied strategies for getting ahead through migration - both within and across national borders. To better support youth in developing countries, we need to know when migration becomes a risk and for which groups of youth, where and at what costs?  But we also need to acknowledge the ways in which young people use mobility and migration to overcome their social exclusion and wider systems of inequality. Acknowledging young people's roles as development actors and the difficult choices they face in daily life is a good start.

Gina Crivello (2011) 'Becoming somebody': youth transitions through education and migration in Peru, Journal of Youth Studies 14.4: 395-411

Jo Boyden and Neil Howard (2013) Why does child trafficking policy need to be reformed? The moral economy of children's movement in Benin and Ethiopia, Children's Geographies 11.3: 354-368