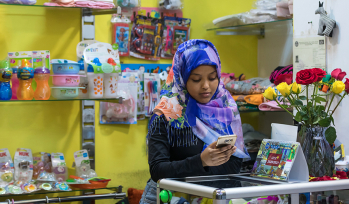 The unprecedented increase in the use of online learning throughout the COVID-19 pandemic has exposed stark inequalities in access to the internet around the globe.

Recent research from the Young Lives COVID-19 phone survey in Ethiopia, India (Andhra Pradesh and Telangana), Peru and Vietnam, shows that a growing digital divide and interrupted education is widening persistent inequalities.  Students from the poorest households, rural areas and marginalised groups are most likely to have been excluded from online learning during the pandemic, which when combined with increased domestic work is often having a disproportionate impact on vulnerable girls and young women.

To mark the 2021 International Day of the Girl, UNICEF is calling for urgent action to close the gender digital divide, empowering girls and young women to have full access to digital technologies, skills and jobs, as equal leaders in the digital revolution.

This blog argues that increased investment is required to improve internet connectivity and the availability of low-cost digital devices to reach girls and boys from the poorest households and marginalised groups, particularly in rural areas. But to make a real difference in addressing the gender digital divide further action is required to challenge gender stereotypes and cultural barriers that inhibit girls’ access to the digital world.

Unequal access to digital technology was a problem before the pandemic

Access to the digital world was very unequal across the Young Lives countries before the pandemic, with children in Peru and Vietnam having much higher access and earlier age of engagement with digital devices (including the use of mobile phones, computers and the internet) than children in Ethiopia and India.

We have also seen significant digital divides within each country, with those from the poorest households, from rural areas, and whose mother received little or no education, having least access to technology.

In Ethiopia, four out of five (81%) of rural children in our sample had never used the internet by the age of 15. In India, girls from the poorest households and rural areas are particularly disadvantaged, with 89% of rural girls having never used the internet by age 15, compared to only 34% of urban boys. Even in Vietnam, where there is high overall access to the internet, a quarter (25%) of the poorest children had never used a computer by the age of 15, compared to just 3% of the wealthiest children.

Previous Young Lives evidence has also shown that the development of young people’s digital skills can be predicted as early as one year of age, primarily depending on family wealth and maternal education, but with the child’s gender playing an important role depending on country context, this was  particularly evident among our sample in India where girls were shown to develop significantly lower digital skills than boys.

Interestingly, our analysis shows that earlier and more frequent access to digital devices is associated with the development of higher computer and internet skills, even after taking into account the impact of socio-economic inequalities and gender. These are important findings for early education policy and demonstrate the potential lasting impact of tackling early disadvantage.

Digital skills are increasingly important for getting decent work

Access to digital devices and strong digital skills are increasingly in demand as economies grow and can be transformative in helping young people find decent work or to set up a new business.

For example, owning a mobile phone can be especially empowering for girls and young women, enabling better and quicker knowledge of job opportunities or helping them keep in contact with suppliers or customers.

“[My] mobile phone is very important in getting orders and sharing information from wholesalers. They call me when new clothes come from foreign markets.” Nigisti, runs a small clothes boutique in Ethiopia.

Yet, as with internet access, while the proportion of young people in our study who own a mobile phone is very high in Peru and Vietnam, mobile phone ownership remains low in Ethiopia and India, especially among poor households and in rural areas, with a persistent gender divide.

COVID-19 has exacerbated the digital divide and widened educational inequalities

The dramatic increase in the use of online learning following the closure of school and universities, throughout the COVID-19 pandemic, has exposed and exacerbated the huge digital divide between and within countries around the world.

Our new evidence shows that continuing to learn during physical school closures has been almost impossible for students without internet access and a device to learn on, with interrupted education widening inequalitieslikely to have a profound impact on future life chances, particularly for vulnerable girls and young women.

In Peru, 18% of 18–19-year-old students whose education had been interrupted had not returned to studyby the end of 2020. There is a worrying risk that many poorer students, particularly those from rural backgrounds and without internet access, will be left behind and may never return to education.

“No one thought this pandemic would be a long-term issue.  I wanted to [work] in the morning and [study] subjects by the night, but with this pandemic I couldn’t.” Gabriela, former civil engineering student in Peru.

In India, almost one in five 18–19-year-old Young Lives students had experienced practically a whole year of lost learning by the end of 2020. In our survey of headteachers, nine out of ten reported that a lack of technology was a key challenge in supporting student learning during school closures.

Among those most likely to have been disadvantaged by interrupted education in India, girls have been hardest hit, especially those from poor and rural households, those from disadvantaged caste groups, and those without internet access: less than 1% of female students from the poorest households had access to a home computer to continue their studies during the pandemic, compared to 11% of male students.

In addition to interrupted education, the pandemic has also significantly increased the already heavy domestic work burden faced by girls and young women, suggesting that households tend to resort to more traditional gender roles at times of stress.

Even where this does not result in dropping out of school, this is likely to significantly reduce the time girls have available to keep up with schoolwork. Girls who do drop out of school early are, of course, even less likely to have access to computers and related digital learning. Our recent findings have also indicated that girls whose education has been interrupted are particularly at risk of worsening mental health, as well as being at greater risk of early marriage and parenthood.

Technical fixes are not enough; action is also required to challenge gender stereotypes

Whilst governments around the world have launched a range of initiatives to improve digital access and support online learning during the pandemic, there is much still to do to address the growing digital divide and increasing education inequalities.

Increased investment to improve internet connectivity and the availability of computers and other low-cost digital devices should be targeted to reach the poorest households, particularly in rural areas. Schools and universities need support to ensure continued distance learning reaches all students, including disadvantaged girls and boys, with extended catch-up programmes for those who are falling behind. Teachers and headteachers need to be appropriately resourced, including effective training in using online technology and teaching related digital skills.

But technical and practical fixes are not enough. To make a real difference in addressing the gender digital divide we also need to ensure action is taken to address the root causes of discrimination against girls and women. Community engagement initiatives and locally-led media campaigns which engage whole communities are vital to raise awareness and challenge gender stereotypes and cultural barriers that inhibit girls’ access to the digital world. As schools re-open, targeted initiatives to encourage and empower girls to strengthen their digital skills and build confidence in using computers and the internet could also help to make a difference.