COVID-19: update on the pandemic in Young Lives study countries 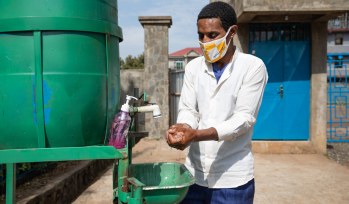 COVID-19 continues to be a defining global event, with evolving and multifaceted economic and social impacts exacerbating existing inequalities. Next week, Young Lives publishes headline findings from our second (of three) Phone Survey calls into COVID-19’s impact on young people in Ethiopia, India, Peru and Vietnam. To prepare for this our Country Directors offer an update on the pandemic’s impact on each of their countries, as well as the evolving response from their respective governments.

The trajectory of COVID-19 cases

The epidemic has grown exponentially, with India ranked second across the world with over 8.9 million recorded cases across the country. There have been over 131,075 associated deaths but cases and deaths per million of the population is lower than other parts of the world, with a rate of 6,440 and 95 for each.

The official figures place Peru in the top tier of the number of people who have died as a result of COVID-19, with over 35,000 deaths and a rate of 1.066 deaths per million people. But since September this number has been decreasing.

Vietnam has maintained its record as a successful model in the fight against COVID-19 and now stands at 141 active cases and a rate of 0.4 fatalities per million people. They are ranked 167th in the world and 7th out of 11 countries in the Southeast Asia region.

Ethiopia ranks 58th in the world and 4th in Africa with over 100,000 cases and 1,500 deaths. Whilst cases per million are less than one thousand (891) and deaths are only 14 per million, there are several thousand in almost all the regions, which suggests that COVID-19 is widespread despite still limited evidence through testing. There is a high proportion of asymptomatic and mild cases.

The continuing impact and Government responses

Having gone into nationwide lockdown at the end of March 2020, India stayed in this for 75 days, with only essential services allowed and educational institutions, flights, hospitality services and large gatherings of any kind prohibited. Various restrictions were relaxed from June 8th 2020 and the ‘Atmanirbhar Bharat (Self-reliant India)’ stimulus package was announced in May. The $23 billion Pradhan Mantri Garib Kalyan Yojana (PM-GKY) relief package is targeted at the poor and vulnerable but has received some criticism, as it reallocates funding across existing budgets.

A critical impact for young people in India has been the shutting down of educational institutions and there exists a huge digital divide which has excluded vulnerable populations of students with limited internet facilities at home. State educational institutes are attempting to upgrade infrastructure and teachers’ pedagogical skills to provide effective online education but there remains much work to be done. With the closure of schools learners have lost the opportunity for physical, affective and psychological development.

Peru instituted a national lockdown on 15th March 2020, with the economy gradually reopening since May with continued restrictions on the movement of people. At the start of October the country entered phase 4 of economic reactivation, which allows for the reopening of most businesses with a health plan (that they will have submitted to the Ministry of Health) in place. Limited capacity has been placed on restaurants and tourist sites, whilst a curfew is in place between 11pm and 4am, with restricted movement on Sundays. Masks are mandatory in public places and schools and universities continue to teach remotely.

There has been a near 40 per cent increase in unemployment and over 30 per cent decrease in GDP in the second quarter of 2020. One of the outcomes of the lockdown is that vaccine campaigns were not held and there have been diphtheria-related deaths for the first time in over 20 years.

Peru is in the midst of political upheavel after the removal of president Martín Vizcarra and the installation of the head of Congress, Manuel Merino.

A second wave of community transmission leading to a surge of infections in the summer, led to the implementation of local lockdowns in Da Nang as well as major tourist destinations, Quang Nam and Hai Duong. These were relaxed in the middle of September and as it stands the total number of cases in Vietnam have been 1,180 with a death toll of 35.

Vietnam’s success in responding to COVID-19 means that, while social distancing measure remain, all in-country economic activities have resumed, including domestic flights and tourism. The economy shows signs of widespread recovery with a GDP increase in the third quarter of over 2.6 per cent year-on-year and an under-employment rate that stands at 2.79 per cent. But the economic impact of COVID-19 continues to be felt, with real incomes 7.2 per cent and 4.9 per cent lower year-on-year for the 2nd and 3rd quarter of 2020.

Ethiopia is currently relaxing some of the measures introduced to respond to the virus, with the removal of restrictions on transport and the gradual re-opening of educational institutions. While no lockdown has been imposed in Ethiopia, there remain regulations including wearing masks in public, washing hands before entering buildings and not shaking hands. While there has been relatively good compliance in urban areas, the low rate of deaths and high asymptomatic cases has seen an increase in complacency and risky behaviours (such as during holidays, weddings and funerals).

COVID-19 effects have impacted the poor and more marginalized due to an economic slow down that has led to increased unemployment and exacerbated inequalities. But other hazards and shocks have sometimes eclipsed COVID, such as the September floods, which displaced 300,000, and locust swarms, that have impacted this year’s harvest and will likely lead to food insecurity, and most recently the outbreak of fighting between the federal government and the Tigray region.

‘COVID-19 has multi-faceted implications on the health and well-being of individuals as well as for the economy in general. India, with a population of 1·4 billion and rampant poverty faces high risk of potential infections as well as loss of livelihoods for the most vulnerable populations as a result of the pandemic.’

'The presidential and congress campaigns for the elections in 2021 have started. We are hopeful that the impacts triggered by the virus will be tackled with specific measures on how to recover the path to social and economic growth that Peru was experiencing before the pandemic.'

‘It is important to stress that the COVID impacts have no doubt been worse among the poor and more marginalized, especially those relying on informal work, wage labour and factory work, as well as own account income generation which has been detrimentally affected by the economic slow down, and on which many of the Young Lives youth depend.’

‘Building on the success in COVID-19 control, the Government of Vietnam has recently rebalanced the focus of its policies towards economic concerns, after the local lockdowns were lifted in the middle of September 2020.’

Headline reports from the Second Call of Young Lives at Work’s Phone Call Survey in Ethiopia, India, Peru and Vietnam will be published on 23rd November. Young Lives At Work (YLAW) is funded by the UK's Foreign, Commonwealth & Development Office. For more on YLAW, please see our webpage here or follow us on Twitter @yloxford, LinkedIn or Facebook.

Photo credit: © Young Lives / Mulugeta Gebrekidan. The images throughout our publications are of children living in circumstances and communities similar to the children within our study sample.

All COVID-19 figures are accurate as of November 18th 2020 and are sourced from here.