Early childhood development policies: The evidence and the research agenda 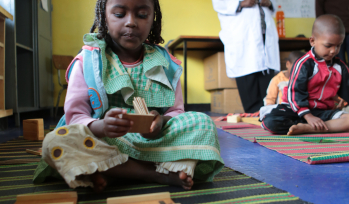 The importance of investment in children’s pre-school years for their later life outcomes is increasingly being recognised by policymakers around the world. A growing number of lower- and middle-income countries (LMICs) are planning or implementing early childhood policies. This flurry of activity has immense potential, but also brings with it substantial risks: if the returns to these new programmes do not quite meet the high expectations set by the returns that are often advertised, the hard-won political will and public support in this area may be lost again.

The recent rapid expansion of primary education across the developing world has shown that a focus on increasing access can bring many more children to school, but it will have disappointing effects on their attainment if it is not accompanied by sufficient investment to sustain quality. According to the Young Lives research study,  despite having access to primary education, in 2006, over a quarter of the 12 year-olds in the study’s Peruvian and Indian samples and about a half of the 12 year-olds in the Ethiopian sample did not reach the ‘low international benchmark’ of having basic mathematical knowledge. This compares with 7% of 10 year-olds in the UK in 2003 (Singh 2014).

As low-income countries begin to invest more in early childhood development (ECD) policy, similar issues will undoubtedly arise. The government of Ethiopia, for example, has announced highly ambitious plans for the roll-out of pre-school from a gross enrolment rate of about 4.2% in 2008/09 to 80% by 2020. Ghana has already introduced two years of kindergarten into the state primary education system; and Rwanda recently launched a new strategic plan to improve access to pre-primary education over the next five years.

Why may we not see returns to these investments?

Because implementing effective ECD policies is hard. The evidence shows that there have been some great successes, but equally there have been some failures and the jury is still out in many cases, especially on the issues of scaling up ECD interventions and sustaining early impacts.

Now is a crucial time to take stock of what we already know and to be clear about what we do not know. At the Institute for Fiscal Studies (IFS), we have studied early childhood development and policies from the perspective of developed and developing countries.

To consolidate the current state of knowledge and identify future directions for research, the Centre for the Evaluation of Development Policies (EDePo) at the IFS and the Inter-American Development Bank (IDB) last week organised the conference, “The early years: child well-being and the role of public policy”, which brought together researchers working on ECD across disciplines and geographical regions.

So what do our findings tell us so far and what questions remain?

To read the rest of this blog go to http://voxeu.org/article/early-years-child-well-being-and-role-public-policy