First thoughts on this year's State of the World's Children 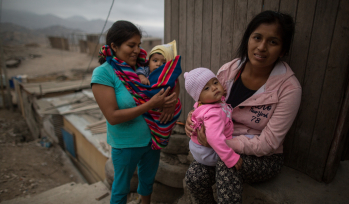 Two big reports are out today – first, UNICEFs ‘State of the World’s Children’ report, and second (given I write from the UK), the UK’s own annual official statistical report on low incomes within the UK (the snappily titled ‘Household Below Average Incomes’ series, that one runs up to 2014/15).

State of the World’s Children is a flagship report from UNICEF (view the excellent interactive report here) and continues the important theme of equity which UNICEF has rightly pushed for a number of years. The report has four substantive elements – specific focus on equity in child health, education, a section on child poverty (highlighting its multidimensional form, and the extent disadvantages compound) and then, helpfully, identifies ‘pathways to equity’ in the conclusion.

The UK’s HBAI report shows three measures of poverty affecting children (the report calls them low income, not poverty measures), ‘absolute’ and ‘relative’ low income measures and a material deprivation and low income combined measure. Those measures were set in UK law, providing an interesting way of ensuring long term stability over policy objectives and these measures have withstood efforts to remove them. What are the main messages?

First, I mention the UK report mostly for what it suggests that is relevant beyond the UK. The report shows UK children are more likely to be poor than UK adults. That pattern is also identified as typical in the European Union (see Fig 3.4 of the State of the World’s Children report) and for extreme poverty (below $1.90 per person per day) in low and middle income countries (see Figure 3.1). That children are particularly at risk of being poor is all the more concerning given the well documented life course links between growing up poor and consequences for children’s wellbeing.

Second, national growth alone does not solve child poverty, effective policy is important. So while it’s a worldwide pattern that children are most likely to be poor, the pattern varies between countries (see also Figure 3.4 of the State of the World’s Children report), with some children having much lower levels of child poverty than others, even accounting for the size of individual economies. Economic prosperity is important to expanding fiscal space to support better policies, but growth alone will not solve child poverty.

Third, and relatedly, while it has very different consequences child poverty is a universal problem across low, middle and high income countries. The SDG agenda is a universal one, as is the agenda of the new Global Coalition to End Child Poverty, of which Young Lives is pleased to be a part. While there are differences in the damaging consequences, there are also commonalities in how life chances of children are limited by poverty, and in how public interventions (social protection and others) are needed to offset disadvantage.

Forth, and probably most interestingly, the State of the World’s Children concludes on ways to combat inequity. In July there will be a meeting of the High Level Political Forum on the SDGs (part of the implementation and monitoring infrastructure) which will take ‘no one left behind’ as its theme. It’s pretty clear the ‘no one left behind’ approach motivates more carefully disaggregated data to track inequalities in progress against SDG commitments, that’s great but better policy options are also important. UNICEF offer five themes - : Information, Integration, Innovation, Investment and Involvement. A quick (limited) summary –

A criticism of the SDGs is they haven’t yet gained that much traction on the ground (North or South); yet worldwide there has been serious concern over rising and entrenched and often unaccountable inequality (for one see the recent reaction to the leaked Panama papers). Perhaps one way to gain more traction is to flesh out the steps to helping ensure no one gets left behind; turning concern over inequity into an action plan over what is needed for children. I am sure there is more to say, but UNICEF’s 5 I’s represent a neat step in that direction, and it’s the bit of the report I’ll be reading most carefully.