Learn, Grow and Thrive: An agenda to empower rural girls 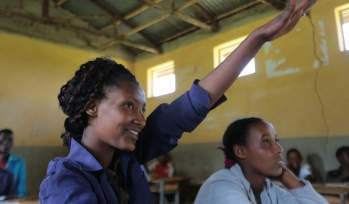 Yesterday, I stumbled across this short post written by Tina Wallace after last year’s International Day of Rural Women. Tina argues that stories of heroic rural girls bringing about change in their community are misleading, overlooking risks to the individual and their relationships while also shifting attention away from what’s really needed to tackle structural inequality.

Young Lives’ evidence supports this view. In a new brief on rural girls commissioned by the Government of Ireland, the chair of this year’s Commission on the Status of Women (CSW62), we show that despite economic growth in all four Young Lives study countries (Ethiopia, India, Peru and Vietnam), poverty and shocks undermine many rural girls’ physical and cognitive development. In turn, poor growth and learning are associated with lower self-efficacy, self-esteem, agency, and aspirations across diverse contexts.

Aspirations and psychosocial wellbeing are factors that determine whether a girl will complete school and delay marriage, co-habit, or have a child. In other words, psychosocial well-being – an important building block for empowerment – depends in large part on children having access to the economic and social resources they need for healthy growth, learning and development.

Both rural girls and boys experience the effects of deprivation. However, from puberty onwards, gendered expectations about their futures funnel girls and boys down different pathways. In every country, rural girls are much more likely than boys and urban girls to be married and become parents as teenagers. Under pressure to support their family, rural boys in Ethiopia and Vietnam were most likely to cut short their education and begin full-time work. Violence and bullying are a part of many children’s school and home life, undermining their learning and well-being and reinforcing harmful gender and social norms.

Girls are not passive in these circumstances. Young Lives’ qualitative research provides many examples where girls have moved to towns, taken on paid work to meet school costs, or persuaded caregivers to let them remain in school. But the range of alternative options for many rural girls is often limited. Rural girls who have stayed in school and delayed marriage have generally done so because they had support from family members, or because of the efforts of teachers or local support organisations to help them fulfil their potential.

There are many bright spots. Attitudes towards education have transformed, and rural girls are much more likely to have received an education than their mothers. Unlike their mothers, very few girls in the Young Lives study married and began childbearing immediately following puberty. Where social protection programmes have been rolled out, they have shielded many rural children from the poverty and nutritional impact of climate and economic shocks. Access to water, sanitation and electricity has improved markedly in the majority of rural Young Lives study sites since the early 2000s, with benefits for rural girls’ time, health and dignity.

Still, girls growing up in poor, rural areas face multiple and systematic disadvantages which undermine their development and well-being. Ensuring that they are not left behind in efforts to achieve the Sustainable Development Goals is not a task for individual girls, but the responsibility of those with the power to direct investment, resources and attention to girls and boys growing up in the poorest rural communities.

The policy brief to which this blog refers was first presented at a CSW62 side event titled ‘Gender equality and the empowerment of rural girls and young women: Evidence from Young Lives’. Read the brief here and find our latest updates across social media with #YLGender #YLAdolescence