Living standards improve but nutrition burden evolves: Preliminary findings from the Round 5 Survey in Peru launched 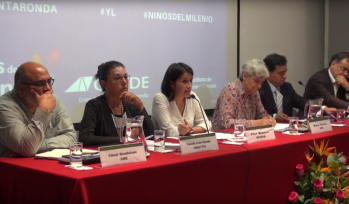 On 21 February, Young Lives in Peru (Niños del Milenio) presented preliminary findings from the fifth survey round (2016) with the launch of thematic fact sheets at an event held at the Grupo de Análisis para el Desarrollo (GRADE). The fifth survey round was conducted in 2016 with Older Cohort 22-year-olds and Younger Cohort 15-year-olds across our study sites in Peru.

This was followed by an open discussion led by panellists Flor Blanco, Director General of Policies and Strategies of the Ministry of Development and Social Inclusion; César Guadalupe, President of the National Council of Education; Fabiola León-Velarde, President of the National Council of Science, Technology and Technological Innovation, and Mary Penny, Co-Principal Investigator of Niños del Milenio.

The event was live-streamed and can be watched back here.

Following are some key insights:

The surveys and supporting data collection materials of this fifth survey round will be published on our website over the coming months.