From #MDGs to #SDGs - better policies for children 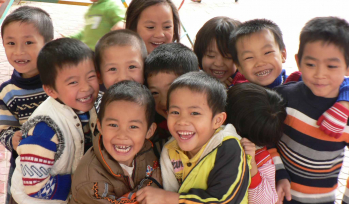 1st January 2016 is 'switchover day' from the MDGs to the Global Goals (there's even a hashtag #MDGstoSDGs !).

It will take a few months to complete the detail (ODI's Claire Melamed has a neat update blog). Soon, with luck, the discussion will move beyond the SDG framework and towards what's needed to achieve the Goals. So as we end the year, where are Young Lives' round up messages relevant to how governments address the new agenda?

First, recognition of the global extent of child poverty is growing. The World Bank has published an age breakdown of how many extremely poor people were children showing that 47% were 18 years or younger. In poorer countries, populations tend to be young, but even so children have a higher poverty rate than older groups. Unless there is a last minute change Global Goal 1 ('No Poverty') will disaggregate poverty figures by age.

As Young Lives evidence shows again and again, child poverty undermines social policy success. Social protection has emerged as a key tool to tackle child poverty and is a target in Goal 1. But consider the comparison between Western Europe and African average spending on children. Western Europe spends 2.2% of GDP on 16% of its population, while African countries spend an average of 0.2% of GDP on 42% of the population. Extending child sensitive social protection has great potential to make other social policies more effective. I hope age disaggregation in Goal 1 will increase this impetus. The new Global Coalition to End Child Poverty has now been launched calling for better policy to address child poverty and Young Lives is proud to be part of this effort.

Second, there are more children in school than ever before, but UNESCO identifies a global learning crisis. Goal 4 ('Quality Education') champions free, equitable and quality education, so can policy do better to secure this? A set of Young Lives presentations from this year's UKFIET conference explored that theme. Reading these presentations highlights some simple messages about what might help overcome the learning crisis. Far from being the vehicle of social mobility, often schools actually reinforce existing socio-economic inequalities. How then to improve the action of schools and to do so equitably? Start young, with quality early childhood interventions but that alone does not compensate for poor quality primary education later. To improve school effectiveness then also means thinking about school systems since not all systems perform equally effectively. And within systems, different schools add different 'value' to children's learning, so identifying the types of school that add most 'value' to children'ss learning (irrespective of their background) is an important way of informing school improvement programmes.

And across all of these presentations is the impact that schooling and household disadvantage on children's learning. Addressing the disadvantage is an important part of helping ensure children are able to learn (so part of the answer is also back to social protection). But there are other opportunities also. It's time to rethink how schools can be a platform to improve children's wellbeing. A key example from Young Lives is nutrition and school feeding. Increasing evidence is showing that 'early is best' but there may be later chances to remediate, as well as to sustain children's healthy growth, and that better growth supports better learning. Extending health and nutrition interventions within schools has important potential to support wider wellbeing, which then also supports learning. Third, the younger cohort of Young Lives children are now about 14 years old. Adolescence and youth represents a second window, after early childhood, to help improve chances. Goal 5 (gender equality) and Goal 8 (decent work & economic growth) both identify the importance of youth. Evidence from Young Lives identifies the many changes which often occur during the middle adolescent phase including school exit, growing livelihood responsibilities, early marriage and childbirth and with changes experienced differently for boys and girls. This phase is of huge policy interest right now particularly with burgeoning youth populations, 'peak youth' as DFIDs Justine Greening MP has described it. Addressing the gap of few jobs for lots of young people is central to this challenge.

I think there are two really important reflections on what's coming out of our analysis of youth and poverty. The first is the value of life-course perspectives (the second decade of life builds on the first) ensuring children are doing well at school earlier in life is a protective factor to help support them to stay on longer during adolescence. The second is the experiences of young people are informed by both hard choices families have to make and later expectations in adulthood. This is really important to understanding why gender disadvantages persist. If parents have limited resources, and women have few choices in the jobs market it's not surprising if they invest more in boys' education than girls'. Putting such choices down to discrimination within the household isn't enough; changing choices requires altering the context in which girls are growing up to promote greater equality, including openning up better employment options later, to ensure investments in education can pay off. More decent jobs, and more equitable access to them would be truly transformational.

A final thought to close with. It is perhaps hard for policy makers (and researchers) to 'hear' children. The participation of children in decisions made about them is a key principle behind the UN Convention on the Rights of the Child. There is an important rights-based argument for participation and we learn more by listening to what children say about their lives. As the world moves from the MDGs to the Global Goals, Young Lives has documented what the 'Children of the Millennium' say about their education, health and social experiences: If you click one link from this blog, click this. The report includes a number of infographics, some of which feature in this blog.