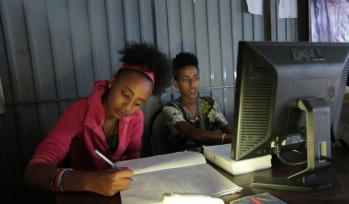 And we know that the Global Goals, or SDGs, state that “By 2030, ensure that all youth and a substantial proportion of adults, both men and women, achieve literacy and numeracy”.

However, recently the field of evaluation is widening its scope, so that demonstrating other skills has become increasingly important.

SDG 4.4 states “By 2030, substantially increase the number of youth and adults who have relevant skills, including technical and vocational skills, for employment, decent jobs and entrepreneurship.” Among these, the measurement of computer or digital skills is increasingly considered a critical area, particularly in the context of  ‘Digitalisation for Development’.

The latest World Development Report highlighted that half the world’s population is still offline. Several international organizations, including UNICEF, UNESCO, OECD, the World Bank and the Inter- American Development Bank, have included digital skills for youth among their priorities as these are now considered essential skills for transitions into the labour market as well as accessing future services. Digital technologies are now seen as a critical base for sustainable development and growth, and as having potential to reduce inequalities.

Past rounds of Young Lives have shown us that there was great inequality among children in our four countries in terms of having access to computers and internet. For example, in the surveys included in Round 3 of Young Lives (administered in 2009), we found that 52% of communities in Vietnam reported having an internet centre or internet café (In Peru we call these low-cost internet centres, cabinas). The figure for Peru was 51%, but only 16% for India and 11% for Ethiopia.

We can see here a very clear “digital divide”. Within countries, we have also found a digital divide, explained mostly by socioeconomic status. To investigate this more closely, we have included a digital module in our latest survey round (Round 5) which will collect information on access to, use of, and skills on digital devices and internet across the four countries.

After examining different formats of items to measure skills, we decided, based on the literature and a pilot test in all countries, that self-reporting was the more valid way to capture the constructs of interest. The items we used in Round 5 were adapted from a variety of sources (see list of references below). The module was included for both the younger and older cohort in each country, so that we can compare if there is a difference within each country.

Specifically, the module includes questions on access and use of computer or laptops, tablets, internet, and mobile phones with internet access (e.g. Smartphone). Some of these are items repeated from previous rounds of YL, so that we can compare indicators over time. In the Round 5 household surveys, we have included items on the frequency of use and age of first use. We included questions on whether the child had an e-mail or social network account, as this would signal engagement with internet communication networks. Our module also includes questions on skills related to computer software. This included mastery of basic digital skills related to file management tasks, operations, text functions, and special operations in office programs or applications. We also included items on skills using internet. These items measured abilities in operational activities, information navigation activities, and creative activities.

In the coming year, Young Lives findings will provide a unique database to study the digital divide, with the possibility to relate skills in this area with school enrolment, academic abilities, and individual and family background from an early age. We expect that our results will be influential for the countries´ and international policy agendas, as providing access to computers and internet to all children is increasingly becoming a priority. However, there is abundant research suggesting that just providing access does not necessarily result in benefits for children in, for example, academic achievement. Our data should be suggestive on what skills need to be developed and what subpopulations need to be targeted.