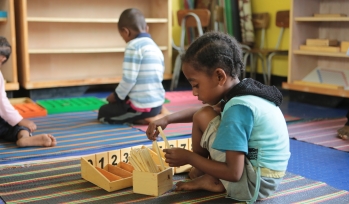 The potential of quality early childhood care and education to transform childrens’ lives is now widely recognised in research, in policy and in service delivery. Most significantly at a global level, the Sustainable Development Goal (SDG) Target 4.2 states that by 2030 countries should: ‘ensure that all girls and boys have access to quality early childhood development, care and pre-primary education so that they are ready for primary education’.

In 2005, when the Young Lives younger cohort were in pre-school, Ethiopia’s pre-school system was still emerging and dominated by private kindergartens for urban families.

Similarly, Peru also had a public pre-school system, but with the complexity of two distinct types of pre-school of different quality (CEI and PRONOEI). It also had a significant private preschool sector for better-off families, often seen as an entry point into better quality private schools.

Finally, Vietnam had a well-established public pre-school education system, integrated within the school system, and generally accessible, except to the most disadvantaged and marginalized minority groups.

According to Young Lives data, in 2006 pre-school attendance was almost universal for our sample in Vietnam (91 percent), Peru (89 percent) and the states of Andhra Pradesh and Telangana in India (87 percent) but very limited in Ethiopia (25 percent), and most of those children attended private pre-schools. In all countries, pre-school attendance was more common in urban areas and among wealthier households. A forthcoming report by my colleagues and I commissioned by the World Bank, documents the relationship between pre-school attendance and numeracy skills development over time, as measured at the age of 5, 8 and 12. While causal relationship cannot convincingly be established within the confines of the report, we provide suggestive evidence on the positive role of preschool for skills development, particularly in Vietnam and in Ethiopia, respectively the country with the highest and the lowest pre-school enrolment.

Figure 1. Gap in maths score between pre-school attenders and non-attenders at the age of 5, 8 and 12 (% of correct answers) 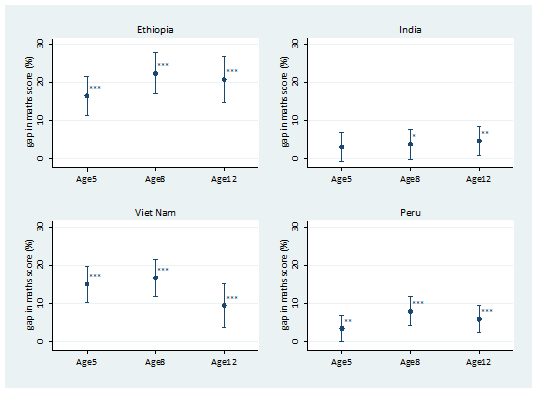 Does the attenders-non-attenders gap in numeracy skills increase as children grow older?

While this difference is more noteworthy in the initial years of primary, it is still significant in the years that correspond to the second cycle of primary.

At the age of 8, attenders have better numeracy skills than non-attenders with the same skills at the age of 5. Similarly children who attended preschool performed significantly better in the mathematics test at the age of 12 than those who did not and had scored similarly at the age of 8. 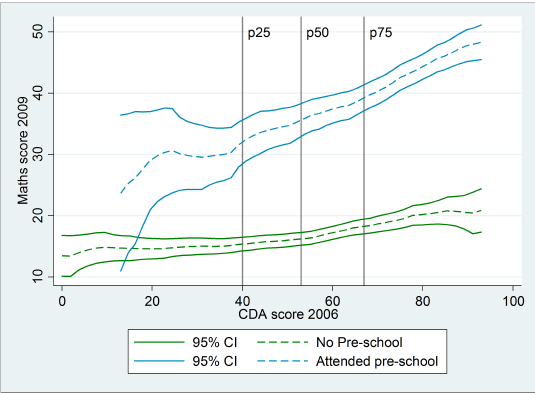 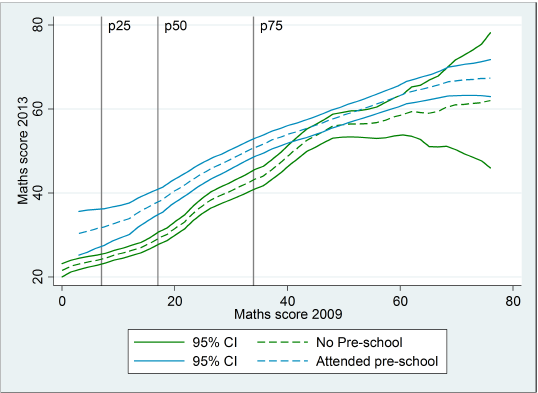 The most important caveat to the analyses to this point is that the results cannot be interpreted causally, mainly because of self-selection problems arising from the non-random assignment into preschool. These graphs do not tell us if any further divergence is only caused by amplification of initial gaps or through other channels in achievement production. In the attempt to unpack the gap in numeracy skills found, we explored the role of human capital endowment at birth, home-inputs, school-inputs and common characteristics at community level at different ages in a multivariate setting.

Young Lives data tell us that gaps in achievements already exist by the time children attend primary school and those children lagging behind at an early age are more likely to be disadvantaged in the future. Good quality and free early education programmes targeting the most vulnerable might indeed compensate for initial inequalities, guarantee equal opportunities to every child, and go some way to improve efficiency and effectiveness of primary education by improving school readiness.