Round 4 survey starts in Vietnam 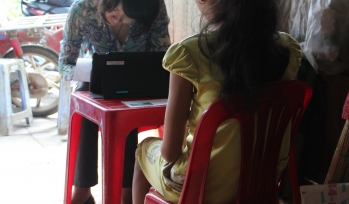 The fourth round of Young Lives survey in Vietnam starts this week (8 November 2013). Over the next few months a team of 60 fieldworkers along with 5 supervisors will travel to 20 communities in Lao Cai in the north-west, Hung Yen province in the Red River Delta, the city of Danang on the coast, Phu Yen province from the South Central Coast, and Ben Tre province on the Mekong River Delta, to interview 3,000 children and young people and their parents or caregivers.

The fieldworkers travel in 10 small groups of 5 interviewers and 1 supervisor and each team will spend almost 2 months in 2 study sites. This round of the survey is taking place 3 years after the previous round when the younger children are aged 11 to 12 (the age the older children were during the Round 2 survey in 2006). The Older Cohort are now aged 18 to 19 and making the transition to adult life.

The Round 4 (2013) survey will offer an up-to-date snapshot of the lives of the children and their families which can be compared with data collected in 2002, 2006 and 2009. This information will feed into reports that help inform and influence public policymaking to support the children and young people of Vietnam.

In preparation for the survey, the survey supervisors spent 2 weeks in training and familiarising themselves with the questionnaires (in English to start off with, to ensure consistency with the other countries covered in Young Lives). This was followed by another 3 weeks of training with the fieldworkers, working with the survey in Vietnamese. During the training, the questionnaires were piloted with children and their caregivers in one urban site and one rural site.

As part of Young Lives commitment to research reciprocity, the fieldworkers will also distribute a short leaflet to share some of the findings from our earlier surveys with the children and their families.

One of the innovations of the Round 4 survey is that for the first time mini laptops are being used for data collection. With the help of SurveyBe software, the quality of data collection can thus be enhanced as well as reducing the time required for data entry. One important part of the training was familiarising the fieldworkers with some of the new questions in the survey to cover the issues of late adolescence the Older Cohort will be facing. For example, some of them will have moved away from their original households to marry or to work. Fortunately, most of the fieldworkers have been involved in previous Young Lives survey rounds and therefore already have a good understanding of the survey and what may have changed in the children?s lives since our previous visit.

Preparatory work for Round 4 started more than two years ago, with the revision of the questionnaires from the previous survey rounds and consideration of what issues are relevant to the current age of the children and young people. There are numerous changes. For example, the 2013 survey is the first time when many young people will no longer be living with their parents. The Younger Cohort questionnaire contains new sections linked with the onset of adolescence. Another innovation is the application of computerised tests of executive functioning (effective memory and reasoning) for the Younger Cohort, a part of the interview they will enjoy as it involves playing simple games on the computer.

The Round 4 data will provide us with a rich dataset that will help us to understand how children?s lives in Vietnam have changed over the last decade. What makes Young Lives different is that we interview children as primary respondents about their well-being and experiences, and so analysis of the data will help government policymakers, researchers, civil society organisations and other stakeholders to put children and their well-being at the centre of policy debates. We will know what policies have worked, what have been the gaps and what these children aspire to and hope for in the future.

Fieldwork will be completed early in 2014, and initial findings will be published by mid-2014. Subsequently, the questionnaires and the final clean data will be publicly archived and made available for other researchers and policymakers to use, as with the previous rounds. The data will serve as the basis for analysis and a range of papers will be produced, all available to view and download on our websites www.younglives-vietnam.org and www.younglives.org.uk.