What do Indian children say about nutrition, food insecurity and food programmes? 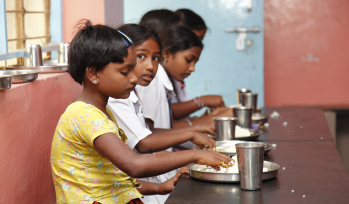 The United Nations Food and Agriculture Organization estimates that about 795 million people in the world are food insecure. Out of those, one in four lives in India, and given the demographic structure of the country, there are good chances it can be a child.  Similarly, the country has the gloomy record of highest burden of child malnutrition globally, with 48 million of stunted children under 5. An indicator of chronic malnutrition, stunting has lifelong repercussions on children through impaired learning, health and productivity, and even socio-emotional aspects such as self-esteem and aspirations.

Amidst the numerous statistics about child food insecurity and nutrition, however, the views seldom heard of are those of the children themselves. By ignoring these, are we risking underestimating the impact of food insecurity on children’s overall well-being and life chances?

These are the topics of a recent paper Ginny Morrow and I wrote, in which we investigated the experiences of food insecurity and food programmes of young people aged between 8 and 15 years old in Andhra Pradesh and Telangana, Southern India, and how these affect their food choices and, more broadly, their lives.

So, what did we learn?

First, healthy foods and diets were central to what constituted “a good life” for those children.  Regardless of their age, caste or gender, or of whether they live in an urban slum or a remote tribal settlement, it was astonishing how many times food, food insecurity and food programmes were mentioned in a wider study that was asking children to talk about their well-being.

Second, children had a very clear understanding of the relevance of varied diets for their education, health or productivity. For instance, Krishna, from Patna (a rural community), mentioned: “We need to study, we need to answer the question, and we must eat well...If we eat well, we can study.” Or Santhi, who had been ill, knew that food could help her to recover from illness:  ‘Now my health is not good. I should take proper food. Food long can do me good... I take more milk, I might get enough strength’.

Third, even more striking was the extent to which, from a very early age, young people grasped the complex social, economic and political factors that permeate the concept of food. For instance, the quality of the food was often associated to social status status (“Poor people ate rice with chetni while the rich ate good food”), or to the ability to participate to be part of community celebrations (“Those who have money cook delicious food on festive occasions whereas the poor do not do so.”).

Further, children were fully aware of the impacts of economic, family and natural shocks on their family’s diet. The food price increases of 2008/2009 were mentioned often, particularly by adolescent boys, who are often responsible for the weekly shop in communities like Polur (an urban slum in Hyderabad) where girls’ mobility is limited: “Since the food prices rose, the dal is not thick anymore.” Vinay (another 15-year-old-boy) said that because of the price rises, they had stopped eating curries at home, and that “the dal was watery”.

Finally, children were able to critically assess the impact of government food programmes, and mostly spoke positively about them. In Polur, Sania, for example, maintained that they help poor people “to lead life without starvation and children are able to eat full meals regularly”. School meals were seen favourably by both children and their families as fulfilling multiple objectives, ranging from improvement of nutritional status to encouraging children to attend school in the first place. This is coherent with the evidence, which has shown a positive impact of the scheme  on nutrition, classroom effort, and even recovery from early childhood shocks.

Some however criticised the quality of the food served in boarding schools or through the Public Distribution System (TDPS), For instance, Rahmatulla, a 15 year old boy, was concerned about the coarse quality of (TDPS) rice, which led to “stomach aches for children”. Others mentioned that the scheme helped to provide grains (calories) but not a diverse diet (which echoes some criticisms of the programme brought up elsewhere), while some girls mentioned the illegal selling of goods on the black market, although they recognised improvements over time.

This evidence shows how important food is in virtually every aspect of children’s well-being - from choices between staying in school or working, to their ability to participate in community events and psychological well-being - in a way that statistics alone cannot convey. Also, it underscores the high levels of awareness about the importance of healthy diets amongst both children and their parents in all our study communities. Health and nutrition programmes may build on this local knowledge to promote healthy diets from a young age to adulthood, particularly in light of the rapid rise of child overweight and diet-related disease – the other spectrum of malnutrition -  in the country. There may also be a need for community engagement when public programmes are implemented, especially in  rural areas, where poorer households are concentrated, in order to improve further those schemes, which already appear to act as important safety nets for families in time of economic shocks.

Children know when their diets are lacking in diversity, quality and quantity, and they know the reasons why. They may well have the knowledge for designing and delivering more effective child-centred food programmes. Is it now time to start listening to them?