Why are some children able to ‘beat the odds’ stacked against them early in life? 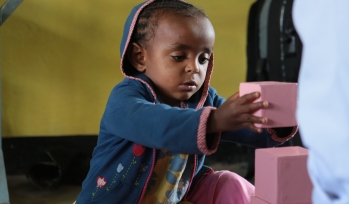 But how is it that some children, despite growing up in the face of adversity, are able to fare well, and even thrive later in life? What helps children ‘overcome the odds’ despite the odds being stacked against them early in life? As Senior Research Officer at Young Lives, these questions have been a key focus of mine. Most recently, I addressed these sometimes surprising narratives in a talk at the Putting Children First: Identifying Solutions and Taking Action to Tackle Child Poverty and Inequality in Africa conference held in Addis Ababa this month.

I presented recent findings from Young Lives which has followed the lives of 12,000 children since 2001. Over this period, we have been able to document children’s inter-related pathways through school, work, marriage and parenthood, as well their migration histories, changes in their nutritional status and in their household economies. So too, by following two cohorts of children born 7 years apart (the Younger Cohort aged 1 in 2002 and the Older Cohort aged 1 in 1994), we have been able to look at how early disadvantage maps out in later life and cross-generational patterns.

This perspective enables us to explore what and why some children are unexpectedly able to shift their life course from one of surviving to thriving. In this blog I share some learnings from those Young Lives children who grew up poor yet who seem to be faring well in their early 20s. In particular, I reference our findings from Ethiopia, in line with what I discussed at the African continent focused Putting Children First conference.

Take 22-year-old Mulu, the fifth of seven siblings who grew up in a poor household in a village in the Amhara region. Mulu met with the researchers four times over a seven-year period; they did interviews and drew timelines to discuss her changing life and circumstances. Mulu's worst memory was of her father's death when she was aged nine. The household struggled to make ends meet. She started picking coffee and then haricot beans, and although the work was difficult, she was happy because she earned money for the family and for her schooling.

Mulu had always demonstrated determination to continue her studies and she had a reputation as a ‘clever’ student. An elder sister played a pivotal role in Mulu’s trajectory, leaving home to attend college, and later getting a job in town. At home, Mulu was pressured to continue picking haricot beans, but her sister persuaded their mother to let Mulu move to town with her to continue schooling. When we last met Mulu, at age 22, she was living with her sister and in her third year of university.

Then there is Mesih from the Tigray region who, like Mulu, grew up in a poor household, the fourth of five siblings. Mesih lamented the fact that he started school late which meant he lagged behind his friends and the long periods of school absence when his family needed him for herding, or when he or another family member fell ill. At first, Mesih didn’t have defined aspirations for his schooling, but when he began to rank top of his class he started to see himself as a good student; one who could go far.

His growing determination was fortified by positive changes in his community, such as the new irrigation scheme which meant more food for the household. Like Mulu, Mesih’s elder sister facilitated his migration to town for schooling, and by age 22 he was in Grade 12, far surpassing the average age for boys to leave school in Ethiopia (age 15) and average grade attained (Grade 8).

Social connections and relationships allow children to get ahead

Across the study countries (in addition to Ethiopia, Young Lives works in the states of Andhra Pradesh and Telangana in India, and in Peru and Vietnam), the children who fared well in poverty had several things in common, even if their individual biographies were unique. They relied on their social connections and relationships to get ahead – sisters and brothers, parents and kin and sympathetic teachers, all made a difference.

Some children thrived despite experiencing vulnerability due to early parental loss, disability or household crises. NGOs and community services moderated the effects of household adversity, particularly during difficult periods.

The currency of collective belief in the individual

Children who fared well brought individual resources to bear on their trajectories: they were motivated and believed in themselves and their future prospects. But individual self-belief on its own was not enough; it had to be supported by their relationships, wider structures and opportunities.

These initial learnings highlight that, rather than one single factor, a combination of timely, mutually reinforcing factors were needed for children to ‘overcome the odds’ in the face of poverty and adversity.

Close inspection of children's lives made absolutely clear the importance of second (and third and fourth) chances. Celebrating the ‘successes’ of individual children needs to be tempered by the uncertainty of their circumstances. They are 'beating' the odds, rather than having 'beaten' them, once and for all. They need sustained support as young adults, since their trajectories remain fragile and their futures uncertain.