Young lives, interrupted: Short-term effects of the COVID-19 pandemic on adolescents in low- and middle-income countries 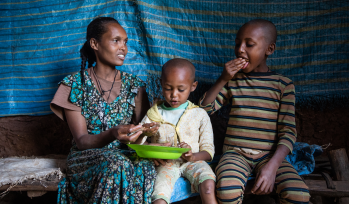 Adolescence is already a challenging period of life, but imagine trying to complete your education and enter the labour market during a global pandemic? Although medical research shows that the young are generally at lower risk in terms of the direct health effects of the novel corona virus (COVID-19), the economic effects are likely to be enduring for those starting their adult lives. In fact, international organisations, such as the United Nations, have warned that the pandemic may reduce the potential of an entire generation - aptly named the “lockdown generation” and/or “Generation COVID”.

In this new paper, we have explored the impact of the COVID­-19 pandemic on adolescents in the four Young Lives countries. Young Lives conducted a phone survey between June and October 2020, interviewing nearly 10,000 young people from two cohorts aged 19 and 26, who had already participated in the Young Lives survey five times (in person) since 2002.

The four study countries have had very diverse experiences since the beginning of the pandemic. Vietnam has been exceptionally successful at limiting the spread of the virus, while Peru has been one of the worst affected countries in the world in terms of COVID-19 cases and deaths per capita (as of October 2020).

Given these varied experiences, how have adolescents in each country been affected by the pandemic?

We found that, despite the low prevalence of the virus, fears around contracting COVID-19 among 19 year olds were still high in Peru, Ethiopia and India. In Peru and India, nearly half of the sample believed that they were at medium or high risk of contracting the virus and, in Ethiopia, this figure rose to nearly seven in 10. In Vietnam, fears were not as high, with only one in five participants considering themselves to be at medium or high risk.

One of the most common experiences across all countries was the negative impact that the pandemic has had on the economic situations of households. Even in Vietnam, where the number of COVID­-19 cases has been low, 60% of households reported a fall in income and/or a rise in expenses. In Ethiopia, Peru, and India, these economic impacts were even more prevalent, with 93% of households in India experiencing an economic shock (see figure 1 below).

Figure 1. Economic shocks since the outbreak of COVID-19.

The degree to which those in education experienced interruptions varied by country. In Peru, 16% of adolescents who had been engaged in education before the pandemic had dropped out or not yet enrolled by mid-October. Worryingly, one in four of these children had not enrolled due to an inability to pay fees. In Ethiopia and India, more than one in five of those previously enrolled were still waiting for classes to resume. In Vietnam, the impact was the least severe, with 8% of previous students choosing not to enrol in education (in most cases this was due to the completion of their studies).

The pandemic also influenced the time use of adolescents. In all four countries, participants reported spending more time on childcare and performing more domestic work than before the pandemic. We found that households tended to resort to more traditional gender roles in time of stress, as the increase in household and caring responsibilities fell disproportionately on females in all countries, while young men tended to work more in the family business (see figure 2). 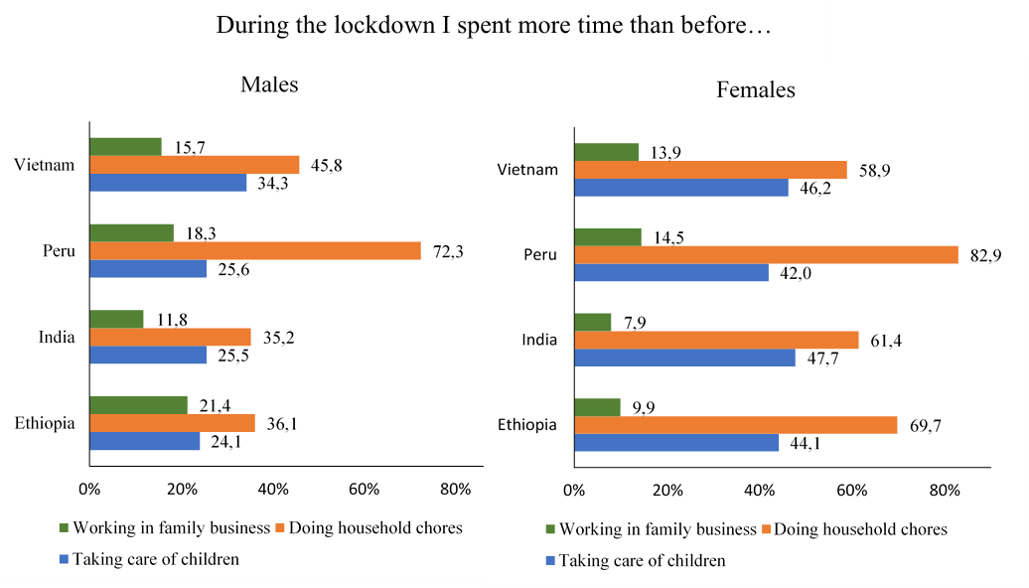 Figure 2. Changes in time use during the lockdown.

Note: The bars show the percentage of the Younger Cohort who agree or partially agree with the statements.

Running out of food during the pandemic was also a serious concern. In Ethiopia and India, around one in every six households had run out of food since the beginning of the pandemic on one or more occasions. In Peru, this figure was around 13% of households, while in Vietnam it was much lower, at around 4%. In Ethiopia and India, this marked a significant movement away from the existing trend, with the proportion of households without food increasing by over 200% since 2016.

The two­ cohort panel structure of the Young Lives data allows us to compare the outcomes of the adolescents (Younger Cohort), with outcomes recorded for our Older Cohort when they had been surveyed at the same age. Previous research using Young Lives data, comparing the cohorts at age 15, showed an improvement in critical aspects of human development such as school enrolment, subjective well-being, and time spent on education. In 2020, just before the pandemic began, higher enrolment rates had continued to translate into higher education grade completion for the Younger Cohort compared to the Older Cohort seven years previous, at age 19.

In our analysis we exploited the fact that the two cohorts can be compared at the ages of 19, 15 and 12. To take into account that differences may have already appeared before the pandemic, we used a methodology in the spirit of a "difference-in-differences" estimator; effectively, this meant that we took the difference between the average Younger Cohort and Older Cohort outcomes at age 19 and subtracted any pre-existing differences between their outcomes at age 15, showing how any gap between the two cohorts had widened or narrowed.

We first analysed the impact that the pandemic has had on the subjective well-being of the Younger Cohort. Subjective well-being was measured in all rounds using the Cantril (1965) Self-anchoring Scale, known as Cantril's Ladder, which asked the respondent to visualise a ladder of nine steps, with the bottom step representing the worst life and the top step representing the best possible life. Respondents were asked to identify which step they presently stand on. 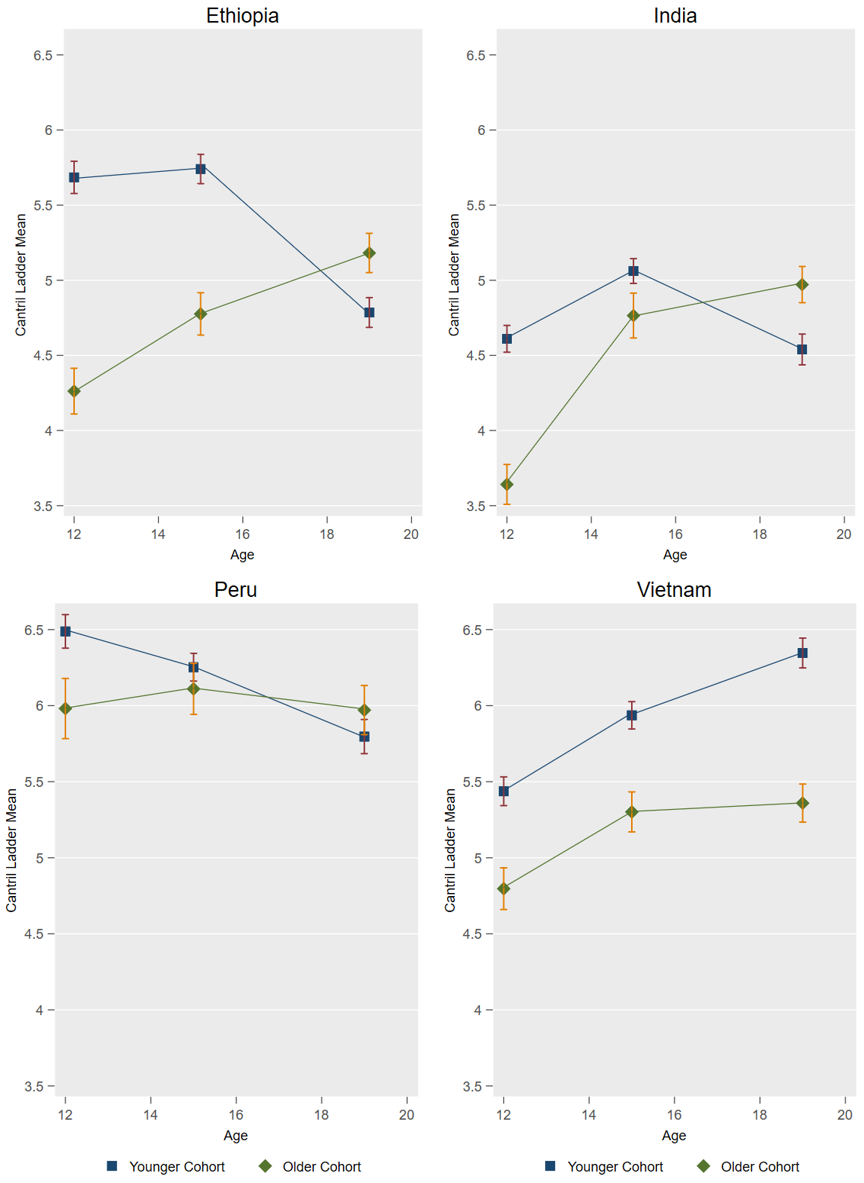 Figure 3 above shows the average ladder step for each cohort over time. Before 2020, the Younger Cohort had reported higher well-being than the Older Cohort at the same ages of 12 and 15 in all countries. This is no longer the case in Ethiopia, India and Peru. The exception is Vietnam, where the gap between Younger and Older Cohort has continued to increase. When thinking about the reasons as to why this may be, the results discussed earlier point to a number of areas of concern that could explain a drop in relative well-being for this cohort.

We also compared economic shocks between the two cohorts, focusing on whether the household had experienced job losses and/or losses in the source of income. The results suggested that, at age 19, the Younger Cohort was more likely to report a job/income loss in the household in all countries. Mirroring the country COVID-19 experiences, the increase was largest in Peru and smallest in Vietnam.

In line with the interruptions to education, we found that, at age 19, the Younger Cohort had experienced a significant fall in relative enrolment compared to the Older Cohort in all countries. Again, the magnitude of the relative reduction in enrolment was largest in Peru and smallest in Vietnam.

In the phone survey, we asked participants about their perception of the current wealth ranking of their household, and also asked them to give their wealth ranking just before the pandemic began.[1] We exploited this information and ran two separate regressions, one using the pre­pandemic wealth and one using the mid­pandemic wealth. We found that the Younger Cohort considered themselves to be worse off during the pandemic than before the pandemic in all countries except Vietnam.

Our results above suggest that the current global pandemic is worsening the life-chances of adolescents at a crucial time in their lives. While these results are short-term, we considered two potential pathways suggesting that consequences may be long-lasting.

First, the sharp drop in well-being may have mental health consequences, and a body of evidence documents a vicious cycle between poverty and mental health. We found that, in all countries except Ethiopia, those who displayed symptoms consistent with at least mild depression and/or anxiety had experienced a greater fall in their subjective well-being. Given that there is little mental health support available in the four countries, the danger is that symptoms could become worse if left untreated and affect later life outcomes.

Second, we discussed the potential consequences of school dropout by looking at the trajectories of Older Cohort participants who had dropped out of school before the age of 19. Young Lives research indicates that young girls who dropped out of school were more likely to get married and have a child during adolescence than those who were still studying. This suggests that the potential increase in school dropout rates due to COVID-19 may have long-lasting consequences that could affect the earnings potential and socio-economic status of the Young Lives participants.

In this paper, we set out to explore the impact of the pandemic on adolescents in four countries with diverse COVID-19 experiences. The effects are evident across several dimensions of well­being, and young people’s lives have been affected in particular with regard to their educational engagement, work and responsibilities, with a resulting drop in well­being. Given this, we believe that COVID-­19 recovery packages should adopt a broad approach to ensure that targeted social protection programmes are effectively aligned with efforts to support young people to complete (quality) education, access decent jobs and develop skills. Recovery packages should also provide vital support services and address mental health issues.

[1] This asked participants to rank their household on a relative scale, with 1 representing ‘destitute’ and 6 representing ‘very rich’.