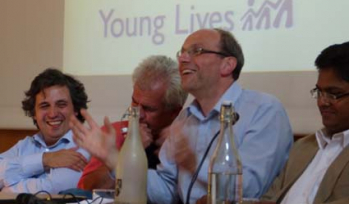 9 July 2013: This week researchers from around the world gathered in Oxford for a conference to analyse inequalities among children in developing countries. The papers discussed the extent of inequalities in key indicators of children?s well-being, especially how inequalities change as children grow up and the factors that mitigate or reinforce these early inequalities.

Researchers from Oxford?s Young Lives study of childhood poverty were joined at the conference, held at St Anne's College, Oxford on 8 and 9 July, by colleagues using other longitudinal datasets ? the Gansu Study of Children in China, CEBU in the Philippines, the Indonesia Family Life Survey, the Footprints in Time study from Australia, and LEAPS in Pakistan.

?The conference was the first to bring together researchers using longitudinal data to analyse how poverty affects children?s lives over time as they grow up, how different dimensions such as gender and socio-economic status interact, and what this means for children?s life trajectories,? said Sofya Krutikova from the conference organising committee.

And throughout the conference guest bloggers Matt Collin and Lee Crawfurd were sharing their responses to the presentations and discussions. Find out more about them. Conference hashtag: #younglives

Read reflections from Sofya Krutikova on the conference.