#IWD 2016: ‘pledging for parity’ needs to start with childhood 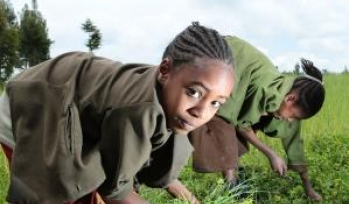 The theme of this year's International Women's Day campaign is 'pledging for parity'. The 'pledging' part of the slogan draws attention to individual commitment and to action. 'Parity', on the other hand, highlights the relationship between two or more things, and is generally defined as the state or condition of being equal or equivalent. In this context, the positive focus of parity suggests gender-balanced power. And, more often than not, parity refers to relations between men and women. After all, girls have their own day - 11 October - marking International Day of the Girl Child.

I would argue that childhood has a lot to do with gender parity. The reasons why become clear when we look at the flip side of parity, and turn our attention to the workings of inequality.

Inequality is a major theme of Young Lives research and policy work. Its relevance for International Women's Day goes beyond drawing attention to gender-based disparities. Our findings point to intersecting inequalities, such that boys and girls are affected, at different ages and in different ways, shaped by dynamics within households, socio-cultural context, institutional structures and economic pressures. For example, in adolescence, gaps between girls' and boys' school enrolment increase, but the patterns vary by country, and in all cases these gender gaps are smaller in size than the gaps determined by poverty or by place of residence (rural or urban) as the figure on below shows.

We therefore need to consider similarities and differences within and between groups of girls (and women). This point hit home for me earlier this week when I visited my 11-year-old daughter's junior school where I facilitated a discussion on international development with a group of twenty 9- to 11-year-olds in the after-school 'Global Club'. I went prepared with a stack of fresh interactive development âeducation materials recently produced through an Oxfam - Young Lives collaboration. I used the prepared slides to define 'development' and 'inequality' and adapted a geography lesson based on the Young Lives materials with which I was already familiar. My main concern was how to address inequality through the life-stories of children in India, Ethiopia, Peru and Vietnam - without setting up an 'us' and 'them' dynamic. The children started out by mapping their own local community (an historic market town in Oxfordshire). I then read a narrative account of Tufa, a 13-year-old boy growing up in an Ethiopian village (a Young Lives research site).

This simple mapping exercise used comparison to create empathy rather than judgement. The children were interested in the physical aspects of the other children's environments, but they also wanted to know about their relationships. They kept asking about the number of brothers and sisters Tufa had so that they could include them in their maps. They connected to everyday things like the long distances to the nearest secondary school, the lack of toilets, the football fields, and the places to buy food, aspects that affect boys and girls, but in different ways. When I distributed Salman's map, one shy girl at a table remarked proudly, 'I'm Indian!', making an immediate connection between herself and a Young Lives boy growing up in Hyderabad.

What do Maisy and Ayu have in common?

Talking to the Global Club about gender, inequality and development made me pause and think about Maisy, my own daughter's experience of childhood, compared to the girls whose lives I have been researching and writing about for about as long as Maisy has been alive. We have been following one age-group of girls and boys since the age of 12, using qualitative techniques such as interviews, group discussions, drawing and mapping. We visited them every few years over a seven-year period to see how their circumstances changed and what this meant for their unfolding biographies.

Ayu is one of the girls we have been following in rural Ethiopia. Looking at her timeline or 'life map' (aged 12) below, I find it difficult to relate her experiences of childhood to Maisy's.

In the life map constructed with Ayu, we discovered that many of her childhood memories were associated with illness, including malaria, a facial rash, and a chronic swelling of the neck, all of which resulted in her missing school, and eventually dropping out temporarily. We also recorded Ayu's changing roles, responsibilities and time-use, the relationship between schooling, housework and paid work, and how she felt;

RESEARCHER: When did you start to work? What kinds of work have you done?
AYU: When I started school at 8, I also started to work at home.
RESEARCHER: What activities did you start to do?
AYU: Baking injera [local bread] and preparing coffee.
RESEARCHER: Do you bake injera now?
AYU: Yes! I started when I was 8. I also fetch water and collect firewood, and go wherever mother sends me.
Ayu talked about her time-use in the context of her family relationships.
AYU: I am happy in my work and my education. I am very happy with the daily work because I get money.

RESEARCHER: Why does that make you happy?

AYU: When I get money, even my parents are happy. At the beginning my parents prevented me from doing daily work but now they are happy with what I am doing.

The timeline exercise we did with her elicited Ayu's hopes and views for the future regarding school, work and marriage. When she was 12 her aspiration  was to become a teacher and she was not much interested in marriage:

The Young Lives team has returned several times to visit Ayu over the years, and recorded how she left school in Grade 3 after having been in Grade 2 for five years. She was unable to pursue schooling because of her long-term neck problem, and her engagement in paid work which she managed alongside household chores. By age 16 she was married (apparently, of her own will, not her parents' decision), she moved to a neighbouring town with her husband, and soon after she gave birth to her first child.

In England, Maisy's life is unfolding rather differently. Since she was six months old, she has had access to good quality child care and, later, good quality government schooling, luckily, rarely falling ill, and almost never missing more than a day or two of classes in a year. She is wholly dependent on us, her parents, for food and clothing, and we do not expect or rely on her to contribute financially to the household. She shoulders far fewer responsibilities than most children in low- and middle-income countries take on at younger ages. Marriage is probably in her far-off future, considering that in 2010 the average age at first marriage for women in the UK was 30, almost twice the age Ayu was when she married.

Perhaps it's unfair to compare Maisy and Ayu, since we can predict stark differences in resources and opportunities. The contexts in which choices are made by and for children are vastly different. But you don't have to reach across great distances - between Ethiopia and England - to find inequality. Since the time Young Lives began in 2002, each of the study countries reported economic growth. But we find that the poorest children, those in rural areas and/or from marginalised social groups, are consistently being 'left behind' in terms of nutritional status, learning and employment opportunities.

A cross-generational pledge for parity

This year's campaign calls for men and women to join forces to 'commit to take action to accelerate gender parity'. The examples I have shown provide a strong indication that 'parity' does not pertain only to men and women. We need to sustain and build upon the gains made in early childhood and acknowledge that adolescence - or, the second decade of life - is a decisive period for intervention if we want to tackle intersecting inequalities, including gender-based disparities. Bringing children into the gender parity mix is not meant to divide and fragment feminist agendas by drawing attention away from the need to address women's oppression. It is meant to draw attention to the way inequality plays out across the life-course and across the generations. At the same time, empowering girls for gender parity will not be effective if women remain marginalised and oppressed.

Young Lives is organising an international conference on Adolescence, Youth and Gender (8-9 September, University of Oxford). Registration will open this month so please follow us on Facebook and Twitter for further details.