Some food for thought on World Food Day 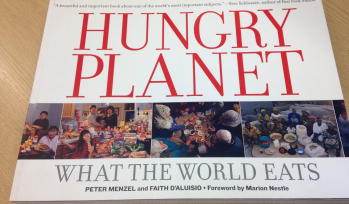 Today is World Food Day and probably the best place to start thinking about the meaning of this yearly recurrence is to read the two comments below, which capture a large part of the rhetoric around food security in both policy and media discourses:

"It is critical that the post-2015 development agenda has an explicit goal on food security ...¦). To sufficiently feed all people by 2050, worldwide food availability in caloric content will need to increase by roughly 64%" (Hansen 2013 p. 4)

"What are all these famines in Ethiopia? What are they about? They are about too many people for too little land. That's what it's about." (Sir David Attenborough, The Guardian, 18 September 2013).

Is food security a problem of insufficient availability of food then? Or of resources too scarce for a steadily growing population? By looking at the official statistics, per capita food supply has been increasingly rising since the 1970s, but this constant increase has not been correspondingly matched by a decrease in the global number of the hungry and the malnourished (as you can see here). So why is FAO still estimating that there are almost 850 million of hungry people in the world in 2013?

In his series "Hungry Planet", photographer Peter Menzel provides us with, literally, a different picture.

These fascinating snapshots portray families from around the world and their weekly supply of groceries. Two details immediately catch the eye: first, the wide North-South disparities that exist in terms of the quantities and types of food eaten by each of the households photographed. The comparison between the two families in Mali and in Britain probably tells us more about the global distribution of food than tables of data could ever do (and I do love data!).

Second, these pictures show how, as countries get richer, households eat more, and increasingly processed and high-fat and high-sugar foods, which in turn are leading to the increase in obesity in both high- and middle-income countries. Overweight and obesity are the flipside of the malnutrition coin, putting more people every year at risk of increased morbidity and mortality. Even in the same household, obesity and under-nutrition can co-exist: in the Young Lives sample in Peru for example, 14% per cent of the households were affected by the double burden of malnutrition in 2006, and it is likely this number is increasing as the country's economy grows and it's a nutritional transition takes place.

What these pictures do not show us, however, it is diversity in the diet that exists within countries, sitting alongside differences in rural and urban location and income disparities.

Most disadvantaged people in poor countries consume far fewer processed foods than the rich but the opposite is true in many developed countries; obesity rates reflect this. And lifestyle changes are big too, with plenty of implications in terms of nutritional and health status, as many medical publications from India show (examples are these 2 studies of physical activity and diabetes among migrants).

Food security is a highly complex phenomenon involving a plurality of actors - policy-makers, consumers, producers - and a variety of other factors that are not necessarily linked to the food chain and markets, such as for instance, access to health, education, or clean water and sanitation. The latter are critical in the process of conversion acquired food into good nutrition. Data from Young Lives - by following 12,000 children and their families across a period of 15 years - have illuminated various aspects of this multifaceted concept, ranging from catch-up growth from early stunting and the effects of early malnutrition on children's later schooling achievements, dietary diversity, to the evaluations of policies designed to promote food security, such as the midday-meal scheme in India or the PSNP in Ethiopia.

Beyond pointing to the complexity involved in the analysis of food insecurity and nutrition, they also show that there are no magic bullets to fix food insecurity and malnutrition, and that context and dimension-specific interventions are a more promising way forward than one-size-fits-all policy solutions.