In Double Jeopardy: Girls and Disasters 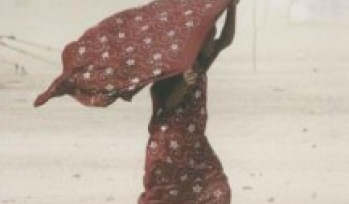 The latest State of the World's Girls, on girls in disaster situations, has just been published by Plan International.

As the principal author of five out of the seven reports, I always make a research trip to get a sense of the reality of the issue on the ground and to talk to and interview girls, their families and their communities. For this report, I went to Pakistan, which had suffered horrendous flooding in 2010 and where, in some areas, this was continuing to disrupt lives. There were three things that really struck me.

First, that in almost every village I visited in the Punjab and in Sindh, women told me stories of how the previous day or week, a woman had died in childbirth. This was worse when there was flooding, they said, but in fact it was a common, and, they knew, preventable, occurrence.

Second, that so many children - and girls in particular - were not going to school. One of the consequences was that they could not really imagine anything beyond the lives they were living. My questions about their futures, even about their hopes and dreams, were often met with a blank stare. But when I asked them to draw a picture of their lives before and after the floods, and gave them coloured pens and paper, they came alive.

Third, just how young the girls are getting married. In one village in the Punjab, there were a group of adolescent girls and lots of babies and small children whom I assumed were their siblings. It turned out that they were the children's children. Girls like Hajra, who looked about 12. She was rocking a child suspended in a sling under the charpai she was sitting on. It turned out that he was her second child. The first died.

The international community has a major focus on adolescent girls. And it is easy to see why. Hajra's future has been set. She has already faced tragedy in her short life - the floods are only a small part of the everyday risks she and her children face each day.

But these risks cannot be dealt with just by training young women like Hajra to sew. Nor will things change by simply giving her training courses in self-esteem or confidence-building, which could even lead to conflict with their parents and the wider community. And while education is important, it needs to be quality education. Even this is not enough. It was interesting to note that the few women I met in the villages who were educated were having a harder time than those who were not, because they knew that things could be different but could do nothing about it.

The problems faced by the girls in Hajra's village, and others like them in many countries around the world, are much more systemic than this. They are to do with poverty. They are linked to lack of infrastructure. And they are underpinned by gender inequality.

There are no schools nearby that girls can attend - and only a few, quite far away, for the boys. There are no hospitals if Hajra has trouble giving birth, or her son becomes ill. And even if a school or a clinic existed, the men of the village might not allow them to leave their homes to attend them.

Discrimination in Pakistan's patriarchal leaves women and girls completely dependent on their fathers and husbands and unable to make choices of their own. Until programmes on adolescent girls address these underlying problems, the lives of girls like Hajra will be no different from those of their mothers and grandmothers.