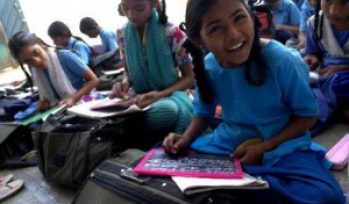 14 November is celebrated as Children's Day in India. The day coincides with the birthday of Pandit Jawaharlal Nehru (November 14, 1889) the first Prime Minister of India. Children addressed him fondly as Chacha Nehru or Nehru Uncle, since he displayed a special affection and faith in children.

Undoubtedly, India has made considerable progress since independence in terms of exemplary economic growth.

Today, India has a child population of 380 million (Census 2011) which is larger than the entire population of North America (USA, Mexico and Canada) and every fifth child in the world is an Indian. The country has the largest youth population in the world and can boast of youngest workforce.

Despite the green revolution, life expectancy doubling and literacy levels quadrupling since independence, 400 million or one-third of the world's poorest people live in India and children continue to suffer from multi-dimensional poverty and extreme deprivation. Infant and child mortality rates remain far from satisfactory and 40 per cent (217 million) of the world's malnourished children are found in India. The country has made tremendous progress in making elementary education universalized, however learning outcomes remain abysmally low and less than 20 per cent of children complete secondary education.

On Children's Day, it is critical that we take a vow to ensure that we provide each child an opportunity to escape from gender and social discrimination, spatial disadvantage as well as chronic poverty. We might wish to renew our resolve to make the country a better place for children by remembering Pandit Nehru's words:

"India has known the innocence and insouciance of childhood, the passion and abandon of youth, and the ripe wisdom of maturity that comes from long experience of pain and pleasure; and over and over again, she has renewed her childhood and youth and age."