Child poverty in India and the limits to growth 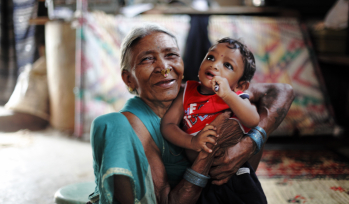 I'm just back from visiting colleagues in Andhra Pradesh last week. I visited to attend the launch of the new Division for Child Studies, at the Centre for Economic and Social Studies, timed to coincide with World Children's Day - the anniversary of global commitments to children through the UN Convention on the Rights of the Child.

The establishment of the Child Studies Division is an excellent sign to see, collaboration between UNICEF in Andhra Pradesh and CESS, and building on years of experience CESS have as a research partner within Young Lives. We need more centres like this - able to bring together in one place what is known about policies for children, to provide hubs for networks of those concerned about improving policy for children.

Having visited and listened to much discussion over the past week, it gives rise to a couple of reflections.

In recent years India has achieved a growth rate that our own finance minister here in the UK would think beyond the dreams of avarice. But growth is not a self-evident good - it is only good where it leads to better human development (either directly or indirectly). And though living standards for many are rising, it's equally clear human development is a lagging indicator. The rates of malnutrition are stark evidence of this point and come up regularly in discussions about the policy challenges facing India (Prime Minister Manmohan Singh has referred to child malnutrition as India's national shame. Not surprisingly, since India has worse stunting rates than many (poorer) Sub-Saharan African countries).

In 2010 DFID published a policy paper on The Neglected Crisis of Under-nutrition. Perhaps they would still choose the same title today - though malnutrition has gained considerable international policy and research attention, although whether that attention is feeding through into action is an open question. For India it may be interesting to consider the case of Bangladesh, a poorer country but one which has made significant health gains in recent years. Analysing what drove the progress in Bangladesh, a recent Lancet editorial highlights equity as a core component to this success (highlighting community development, pro-women and pro-poor approaches).

I had heard on a number of occasions that India has good social policy. And it is a trail blazer - ICDS in 1975 and more recently MGNREGA in 2005, recent discussions on the Right to Education in 2009, and very recently legislation over the Right to Food. The key question seems to be not the policies on paper, but their reach and effective implementation. In particular, how to ensure within those schemes that they effectively reach the most marginalised. We have discussed challenges within the education system, noting the rise of private schooling in India, in part attributable to aspirations for education and concerns over the government schools. Incidentally what is particularly interesting to see in Young Lives analysis of sector-based differences is that although children in private schools score better than those in government schools on tests of maths and vocabulary skills, most of this is down to pupil background not a 'school effect'. What seems to be particularly important to childrenâs learning is whether teachers attend and what they do as part of their teaching. Increasingly therefore many of the inequality concerns are about differences within systems, not simply exclusion from them.

Of course discussing the policy challenge is one thing; finding effective strategies to address them is another. The examples above highlight how the enabling environment for children is likely to be fostered best by a combination of pro-equity development strategies (including broad based, pro-poor, growth) and by effective social policy able to deliver quality interventions for the poorest children.

Recognising the anniversary of the UNCRC, the motivation for that ought to be put the best interests of children at the heart of policy concerns. Caine Rolleston has written of education as the 'Achilles heel of the growth economies'. It's a neat analogy, with implications for policy development which new research Divisions such as this one at CESS need to think about.

Growth rates may look impressive, but if they don't result in sufficient human development gains, they create their own weakness. Persistent inequality and ineffective policies for children undermine children's future chances to develop skills themselves place a limit on growth potentials.