Coping with risk and difficult times in rural Andhra Pradesh 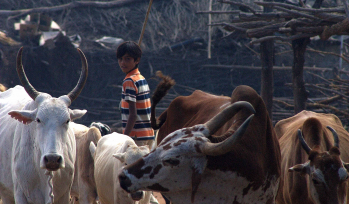 Countries in the Young Lives study are especially vulnerable to environmental shocks.

On global indicators, Ethiopia is second most at risk of drought, India the third most at risk for flooding, and Vietnam fourth for being affected by storms and tenth for flooding. Poor households tend to be located in the areas most at risk to environmental hazards and to have more precarious livelihoods and so are prone to experience the same shocks repeatedly. Recurrent shocks, combined with food insecurity, have long-term impacts on children's development and well-being.

Children who have experienced food shortages are at additional risk of poorer outcomes in physical health, learning and subjective well-being. Governments have responded by expanding social protection schemes, to attempt to reduce poverty and to provide a safety net in the event of shocks. Our recent research highlights the impact of the Mahatma Gandhi Rural Guarantee Scheme (MGNREGS) on a rural community in Andhra Pradesh. MGNREGS was introduced in 2005 and provides 100 days of employment a year at a minimum wage rate to every adult in a rural household willing to undertake unskilled manual work.

One of our study sites, Katur village, is located in the Rayalaseema region of Andhra Pradesh. Katur is a drought-prone area and all the major crops grown, such as sunflower, peanuts, pulses and peas, are dependent on rainfall. During the non-agricultural season, many inhabitants used to migrate in search of paid work to cities like Mumbai and Tirupati and to Bangalore for work in a concrete factory.

Adults report improving living conditions over the years 2007-10 and attribute this to the increases in social protection and security schemes. Women described the important role played by more than 20 self-help groups in Katur, organised under the state government IKP programme. One woman explained:

This has also meant that there is less bonded labour to repay debts as families no longer need to borrow from Kamma (higher) caste families. However, other women felt that self-help groups were a 'big headache' as 'when we do not have work, then how can we repay the amount to the self-help groups?' In addition not all community members can obtain loans. As one woman explained, 'If a household has more sons then there is more inclination to lend money as the family can send the sons to work and repay the amount without fail. As is the case with households who own individual assets like land, there are more chances for recovery of the money.'

Community members also describe the positive impact of MGNREGS. Among Young Lives households in Katur, 95 per cent had job cards and had worked on the scheme in 2008-9. Community members report that migration to urban areas for work has declined and that MGNREGS has created a wage floor. Tejaswini, aged 8, stated that only the landlords had not benefited from MGNREGS as no one was prepared to work for 40 rupees per day any more. Children felt that there was more money available to meet their needs. For example, Triveni, aged 16, described how 'previously when there was less money, I used to buy fewer notebooks and used to write two subjects in one book only. Now after the drought works [MGNREGS] came, I am able to keep one book for each subject.'

MGNREGS also helps families cope with shocks. Govindh, aged 17, described the struggles his family had faced over the past few years:

"Seeds did not grow in the first year, and the second year rains have not come ... so we didn't harvest ... We did not have money to buy vegetables and other things to celebrate festivals ... so it was not well at home."

In addition, his mother was ill and the family had to pay 10,000 rupees for treatment. Govindh said: 'We borrowed money from my grandmother's village ... We borrowed a little, two, three times', and they also borrowed from his uncle. However, the introduction of the MGNREGS has enabled the family to cope better: 'Through the employment guarantee scheme we cleared the loans.' Govindh works on MGNREGS in the college holidays and at the weekend in order to support his family.

This is one of a series of six case studies included in a new Young Lives paper Changing Children's Lives, which explore how location - where children live - and change - how their communities are transforming - are important factors in the opportunities open to children and the risks they face.

Laura Camfield and Uma Vennam (2012) From Policy to Implementation: An In-depth Exploration of the MGNREGs in Andhra Pradesh, Working Paper 82, Oxford: Young Lives.