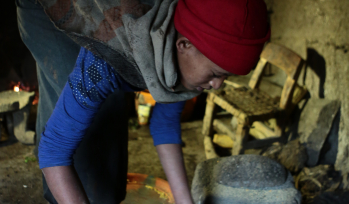 Despite the rapid expansion of formal schooling in Ethiopia, attending school does not replace the need for children to contribute to the household or farm, or do paid work, especially in contexts of poverty, weak school systems, and uncertain future opportunities.

Economic pressures and social norms continue to draw children into paid and unpaid work, as well as domestic responsibilities, with formal schooling sometimes placing competing demands on children's time. Multiple, recurrent adverse events and shocks and the persistence of poverty mean that families have to balance the need for survival in the present with the anticipated rewards of keeping children in school. We have been looking at the different factors which contribute to children working and how changing livelihood opportunities are shaping childrenâs roles and responsibilities in rural Ethiopia.

Zeytuni* is only a few kilometres away from the capital of Tigray region, Mekelle, but it is a relatively remote rural community with a road that is only passable in the dry season. The major economic activities on which the community relies are farming, animal rearing, poultry, trading, masonry and wage labour. Over the last few years two major economic activities have developed, which have led to changes in the working roles of children: irrigation schemes and stone-crushing plants which have sprung up in response to the fast-growing construction projects in towns. The stone-crushing work has attracted a large number of children (including 14-year-old Haymonot), but as the work requires at least eight hours per day, it affects children's school attendance.

Similarly, irrigated farming activities based on water-harvesting schemes have expanded and are bringing change to the life of the community. Irrigation works cover a large area in the village, and some people rent out their land for this purpose. Vegetables and fruit seedlings are now harvested as a result of the irrigation schemes. Children from around the age of 13 participate in this activity by assisting their parents. For example, Mihretu, a 16-year-old boy, is responsible for watering and taking care of vegetables on the family's irrigated farm.

The area is highly prone to drought. In recent years the PSNP has become the major mechanism by which families cope with droughts. Households undertake work on public schemes (e.g. road building, forestry, school renovation) in return for assistance from the Government in the form of grain or cash. While many caregivers participate in this scheme while their children attend school, some children may also be involved in the work or take over chores in or around the household while their parents work. These activities take up children's time and they often miss school.

While the new economic opportunities help children's families by subsidising their economic situation, which is aggravated by protracted droughts, children's roles and responsibilities have also changed in response.

For example, in 2008, at the age of 14, Haymanot attended school in the afternoon and worked on the PSNP in the morning with her sister as her mother was too sick to work. She was also responsible for household chores and doing some embroidery work. However, Haymanotâs sister also became ill. A combination of famine, drought and sickness ran down the household assets, with the result that Haymanot dropped out of school in Grade 5. She described her sadness, as she was winning awards at school, but says it was her decision to stay at home and care for her mother: âI feel very bad because I am not going to school and my mother is sick. â¦ I will be happy if I continue going to school and my mother gets better.â At this time Haymanot was also suffering from repeated malaria, diarrhoea, vomiting and fever, exacerbated by her work in the stone-crushing factory. Three years later Haymanot married. She feels that âit has benefited me because I have got rest from going to workâ. She said her health was much better and she now gets enough to eat.

On the one hand stopping school and caring for her mother restricted Haymanot's opportunities and affected her physical health for a time. On the other hand, going back to school in these circumstances would not be well regarded in the community. Haymanot's mother explained that "if she leaves any job and continues with her education, people will make fun of her, saying 'Look, Haymanot is idle' ". Working and supporting her mother enhanced Haymanot's reputation: "Some people who saw her always working admired her and asked how she managed to work and withstand the hardship at this age". Haymanot did not feel that her experiences had affected her life negatively. She hoped to delay having children and return to school the following year.

This is one of six community case studies included in a new Young Lives paper Changing Children's Lives, which explores how where children live and how their communities are changing are important factors in the opportunities open to children and the risks they face.