“I do not like my school, since the teachers beat me badly”: how corporal punishment makes children feel 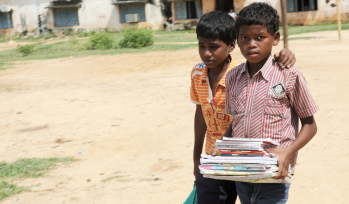 One of the success stories of the Millennium Development Goals has been the increase in enrolment of children in primary schools. However, little attention has been paid to the daily experiences of children in school, from their viewpoints, and the role corporal punishment plays in those experiences.

Corporal punishment is widely used in schools globally despite international concern about the effects on children and the implications for their capacity to benefit from school.  And yet it persists. Changing social policies send clear messages about practices that are not acceptable, but the eradication of corporal punishment in schools globally is proving difficult, and India is no exception. Violence against girls is now high on the Indian political agenda, after the horrific fatal gang rape of a female student in Delhi in 2012 led to widespread demonstrations demanding an end to sexual violence against girls and women.

However,  more ‘normal’ forms of violence may go unnoticed or unquestioned, and limited academic attention has focussed on children, and how patriarchy leads to gendered differences in the way boys and girls are treated at home, school and society at large. Social divisions based on caste, class and socio-economic status remain predominant, and violence against the powerless by those in power is common.

This extends to schools where teachers ‘control’ the students through corporal punishment. For children in Andhra Pradesh, norms relating to femininity mean that girls are required to be docile and submissive, and not to be ‘caught’ being ‘naughty’. Norms of/or ideas about masculinity may mean that boys are supposed to be able to accept physical punishment and to withstand pain.

This week sees the launch of a book entitled Gender Violence in Poverty Contexts – the educational challenge edited by Jenny Parkes. Chapter 5, Children’s perceptions of punishment in schools in Andhra Pradesh, India by myself and Renu Singh presents research evidence from Young Lives about the prevalence of school corporal punishment among a sample of children in Andhra Pradesh.

Our findings indicate that corporal punishment of children in schools is endemic.

India ratified the UN Convention on the Rights of the Child in 1992, and has copious policies that ban corporal punishment in schools. But these seem out of kilter with everyday realities. The Right of Children to Free and Compulsory Education Act of 2009 guarantees school for all children between the ages of 6 and 14. Elementary schooling has expanded but this rapid expansion has not been matched by comparable increases in the teaching workforce. There is a shortage of teachers in government schools, and class sizes are very large, putting pressure on teachers to control high numbers of children, in both the private and the government sector.

The Government of India commissioned research that included over 3,000 children aged from 5 to 18, who were asked about physical abuse by teachers. In all age groups, 65% reported being beaten at school.  Overall, the Young Lives findings reinforce these figures.

Our younger cohorts (7-8 year old) were significantly more likely to have witnessed and experienced corporal punishment than the 14-15 year old cohort, with over two-thirds of the younger children having been physically punished at school in the past week, compared with one-third of the older young people. Among children aged 14-15 years of age, we noted differences by gender with boys reporting punishment more frequently than girls. There was a less sharp distinction in use of corporal punishment between boys and girls in the younger cohort. This may be because corporal punishment is part of the socialisation of younger children, but when they are older it is no longer seen as an appropriate way to discipline young women, while ‘toughening up’ young men maybe normative.

“Reasons” to be punished

Children themselves explain that large class sizes made it difficult for teachers to keep control – for example, if teachers were absent, they were taught by other teachers trying to compensate by managing more than a class at a time. As the number becomes unmanageable, teachers use a stick to control the children, hitting them for a number of reasons.

Girls and boys spoke of a range of other reasons for punishment including being absent from school for work, illness, or attending family celebrations, missing classes, not doing their homework, not reading well, making mistakes, getting poor marks in exams, not wearing uniform, not having the right equipment, or not paying the teacher for extra lessons. A girl aged 10 explained:

If we don’t study, they beat us. If we ask other children for help, they beat [us]. I went to drink water without asking sir, so he beat me that time. They said all children should come back to class by the time they count 10 after the interval. But I went home [to use the toilet]. After coming back to school, he beat me.

Boys and girls mentioned going home at lunchtime to use the toilet, as toilets in schools are often  inadequate and unsanitary.

The children also described other forms of punishment.  One 8 year old girl explained that her teacher had asked her to do a goda kurchi (sitting on the edge of the wall by balancing on the legs, a form of punishment widely used in India) and her leg became swollen. Children expressed discontent about both physical and verbal forms. Goda kurchi and verbal abuse was described by one 10 year old boy at a government school:

The teachers beat with sticks and rulers and make us sit on our haunches – our legs swell up. They also abuse us, and use foul language, ‘you look like bullocks and donkeys – the herdsman is better than you’ – this makes us very sad.

The shame and humiliation felt by children when treated like this is clear, and breaches children’s human rights to dignity and respect.

Our findings show that poverty at home clearly influenced school discipline practices. Living in poverty meant that children were sometimes not in a position to follow the rules and expectations of school. Children described being punished for not having uniform or the right equipment, or money to pay fees. Anwar, aged 10 said ‘If we don’t get notebooks, then teachers will beat us’.  A boy, aged 15 described how he sometimes missed school:  ‘if uniform is not there [ready], I don’t go because the master will beat me’.

One mother mentioned that the only thing her 7-year old daughter says about school is that teachers beat her: She studies well, she goes regularly and returns, but when there is no dress [uniform] and when we delay the fee payment then she will not go, she refuses to go. ... she says she will not go and she hides behind that wall ... and says that ‘sir will beat me, they will beat me’.

As Young Lives data have shown, economic constraints and family circumstances mean that boys and girls in rural areas engaged in seasonal agricultural work on family land, missed school for days, weeks, or months at a time.  When they did return to school, they faced punishment.  Ramya (girl, aged 12) said: ‘I feel very bad when teacher scolds me. I like to be regular to school, do homework, but I cannot do it all. It is difficult, but I have no choice but to do it’.

Though older boys rarely spoke directly about their fears of punishment, their mothers spoke of their sons’ emotions. Ranadeep’s mother explained:

He liked going to school, but we stop him... Otherwise, we cannot run the family, we don’t get labourers in time and there is no other way for us, so we had to do it like that. When he [returns] teachers, they shout at him and he is terrified.... His father goes there and informs them. ... they scold us, they say, how will he get on if he is absent for such a long time?... we try to pacify them by telling them about our problems at home.

What can be done?

Blaming specific groups (teachers, and/or parents) will not enable progress to be made, and risks alienating teachers already under pressure because of overcrowded classrooms, poor infrastructure, and poverty situations.

Approaches need to develop not only from the top down, but from communities, families and teachers upwards, to find ways of working together to change practices.  There is some indication of shifting attitudes because, although corporal punishment is experienced by all social groups, some older children and parents in better-off communities mentioned challenging corporal punishment by teachers. Learning from the ways in which parents and children challenge teachers’ practices could usefully be channelled into community-led strategies to influence attitudes about corporal punishment.

In global policy debates, much emphasis has been placed on the role of education as the solution not only to reducing cycles of poverty in developing countries, but also to addressing gender violence.

However, the evidence presented here suggests that we must question this.

Violence as an integral part of schooling may have consequences for boys’ and girls’ development that go beyond the here-and-now of childhood to social and economic consequences in adulthood, as children experience fear and risks of injury while at school.  In India, this needs to be understood in the context of high expectations that parents and children have of schools, despite the very low levels of learning that children achieve. Some children dislike school for many reasons, but if they discontinue school because of their experience of corporal punishment, and if they learn that the corporal punishment is the solution to behaviour that is out of line, then formal schooling may inadvertently be reinforcing both cycles of poverty and the use of violence.

This blog is a summary of Children’s perceptions of punishment in schools in Andhra Pradesh, India by Virginia Morrow and Renu Singh in  Gender Violence in Poverty Contexts: The Educational Challenge, edited by Jenny Parkes.