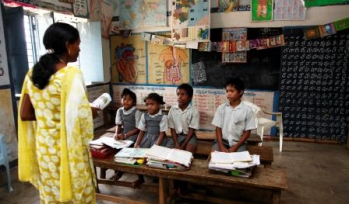 This blog by Kirrily Pells, first appeared in The Conversation on 20 November 2015.

Debates on whether the use of physical force to discipline children is ever acceptable have once again been reignited with legislation passed in Ireland in early November to remove the defence of “reasonable chastisement” for corporal punishment.
In new research conducted by the Young Lives study at the University of Oxford using longitudinal data from Ethiopia, India, Peru and Vietnam, we found that children who experienced corporal punishment performed worse in maths, four years later. The research was part of UNICEF’s Multi Country Study on the Drivers of Violence Affecting Children.
The use of physical punishment, such as smacking, slapping or hitting with a hand or implement, is contrary to the UN Convention on the Rights of the Child, which has been ratified by all states except the US. Yet only 47 countries have, like Ireland, introduced legislation to protect children from corporal punishment in all settings, including the home and school.

Corporal punishment excites strong points of view. Proponents argue that “mild” or “moderate” forms of corporal punishment are an effective and non-detrimental means of instilling discipline and obedience into children. When talking about our research on corporal punishment I often encounter the response: “I was hit and it never did me any harm”. Opponents stress the hypocrisy of laws that do not extend the same protection to children as is afforded to adults.

Studies typically rely on cross-sectional data where child development measures are collected at the same time as reports of corporal punishment. It is then difficult to separate out what comes first: children may perform less well as school because they are hit, or children may be punished because of poor performance.

While we cannot prove causality, the Young Lives data allows us to analyse the links between earlier experience of corporal punishment and how children were performing four years later in school. The longitudinal data also allow us to control for a series of other possible explanations that might affect children’s school performance.

We found that children who reported experiencing corporal punishment at age eight had on average significantly lower maths scores at age 12 in India, Peru and Vietnam. The size of the negative effect was large.

To put our results into context, it is well-established that children with more highly educated parents have better educational outcomes. The associated negative effect of corporal punishment on children’s outcomes was equivalent to the child’s primary caregiver, usually the mother, having between three and six years less education, depending on the country.

Who is most at risk

Large numbers of children are also affected despite legal prohibition of corporal punishment in schools in India, Ethiopia and Vietnam, and a statement of norms discouraging its use in schools in Peru. Among children we surveyed who were eight-years-old, over half of those in Peru and Vietnam, three-quarters in Ethiopia, and nearly all children in India reported witnessing a teacher administering corporal punishment in the last week. Younger children are at greater risk, with the incidence of corporal punishment at age eight more than double the rate reported by 15-year-olds, in all four countries. Boys are significantly more likely to report experiencing corporal punishment than girls across the four countries. This adds to the growing global picture on the greater vulnerability of boys to physical punishment. But it’s important to note that girls are often at greater risk of other forms of humiliating treatment and sexual violence.

Other Young Lives research indicates a number of reasons why poor children experience more corporal punishment, including being punished for lacking school materials and frequent absence in order to undertake work for the household. Corporal punishment not only violates children’s fundamental rights to dignity and bodily integrity, but by impacting upon their engagement with schooling it has the potential to have long-lasting implications for their life chances and can reinforce inequality.

Legislation is an important first step towards eradicating corporal punishment, but on its own is not sufficient. Greater attention is required to understand why bans are not implemented, to support positive teaching practices and to work to address social norms that sustain the myth that physical violence promotes children’s learning and development.