In some places, ‘Bring your child to work day’ is every day of the year 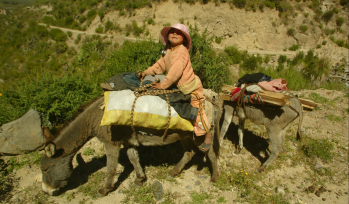 The publication of our new Young Lives working paper, ‘Children’s work in family and community contexts’ in Ethiopia has aligned nicely with two commemorative days. Recently, in the USA, there was widespread observation of Bring your Child to Work Day on 28th April. 1st May marks the more historical International Worker’s Day. And come 12th June , the World Day against Child Labour will be promoted.

Thinking about how our paper might connect to these ‘Days’ made us realize how very differently children are positioned within these themes, revealing a split between wealthier and poorer countries.

For example, the hashtag #TakeYourChildToWorkDay generated a plethora of enthusiastic tweets from parents in diverse settings across the US, from the World Bank, to scientific labs and police stations to data centres. Children were welcomed into these adult work settings and celebrated as ‘future scientists and engineers’ and ‘young minds at work’; some children dressed up in button-up shirts and ties.

In contrast, the messages produced under the campaign #childlabour were accompanied by photos of Indian and African children labouring in fields, quarries and workshops. Children are shown on their own or with other children. In the USA, children are taken to parents’ workplaces to cultivate professional ambition and talent. In low- and middle-income countries, children are represented as doing the type of work from which they require protection.

Of course, the world does not operate in such binary terms. Yet, a Google search of ‘children in International Workers' Day’ seems to send you to links for the World Day against Child Labour.

And just like that, almost unwittingly, children are put back into their place. (I've written about this before here).

The International Labour Organization’s (ILO) webpage on child labour reinforces this point. The ‘facts and figures’ are about quantifying the number and incidence of child labourers, broken down by regions (Sub-sahara Africa, Asia, etc) and sectors where ‘child labourers can be found’.

There isn’t just one ‘Bring your Child to Work’ day

In some places, children work alongside their parents from a young age, at home, in fields or in marketplaces. For example, in our paper, we describe the case of Shemsia who began assisting her mother and sister as an itinerant trader when she was nine years old. Two years later her mother provided her with a small amount of cash so that she could start-up her own sales. She said that selling with her sister and mother gave her the courage to work independently. Filagot was also nine when she began selling; she sold injera (local bread) and would call her mother when customers came. Age eleven, she began to sell on her own in the marketplace, saying: ‘I believe I have better skills [now]. I learned how I can attract customers … I can do everything for myself. I can do these activities even in the absence of my mother. I think it will be useful to show my children what [work] I was doing when I was their age.’

But the reasons why children work are complex and cannot be reduced to poverty alone.

Our study in Ethiopia confirms that poverty does play an undeniable role in propelling children into work.  We found, for example, that most work that children do entails some risks as well as benefits, and good and bad features can exist side by side in the same work. For example, many children use their earnings to cover the costs of schooling, yet they find it a major challenge to combine the demands of school with work inside and outside the household. Boys and girls begin working from around the age of five; the quantity and complexity of their work increase with age, with girls taking on a much greater share of domestic work as they grow older.

Children’s relationships are very important to their working lives; children feel pride when they can contribute to their family’s economy, and they gain skills through their work. But they are ashamed and upset when the work they do is inappropriate for their age or gender. We need to recognize and value the work that children do, and ensure that their work conditions are safe, and that schools are flexible to the needs of working children. Not just on one or two days a year, because working is part of their everyday lives.

All children deserve the conditions and opportunities that would allow them to be seen by the world as ‘young minds’ and ‘scientists and engineers’ of the future.