Tackling malnutrition on the road to Rio 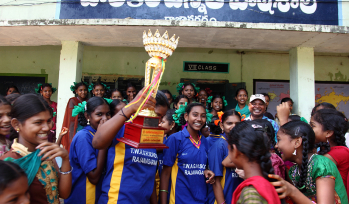 The Rio Olympics get going next week. The London games provided a platform for the British and Brazilian governments to promote concern for hunger and nutrition with a summit held at 10 Downing Street just after the games in 2012. That meeting was followed by governments pledging action at the nutrition for growth summit in 2013. There is increasing profile being given internationally to malnutrition, and Rio is a next step on the road.

Child nutrition must be a central development concern. UNICEF attributes half of all young child deaths to undernutrition. Stunting is an important indicator of chronic undernutrition (measured by children’s height). It is a common problem with about one in four children under the age of 5 stunted worldwide, and it is the most common among the poorest children.

Young Lives collects information on children’s height and other anthropometrics which can then be used to look at the implications of undernutrition. As a unique, long running, and multi-country dataset, this data will be a treasure trove for future researchers, and I’m excited at the prospect of new knowledge emerging from it to inform the development of better policies and programmes for children. Go to the website for existing research papers on the topic, but meantime here are four findings which raise important questions.

First, tackling undernutrition is a strategy for improving children’s learning. It’s well accepted that undernutrition is serious for children’s health, and it’s increasingly accepted how serious it can be for children’s learning. There is much analysis from Young Lives which shows consequences. Recent analysis from Peru looked at whether pre-school access might moderate the impacts of early stunting. The findings reported are that it was better nourished children who gained the most from pre-school. Tackling undernutrition is not only vital for health, but also to improve the impact of education policies.

Second, early is best but it’s never too late. There is a rightful focus on the earliest point in life – the first thousand days following conception has been given great attention, and the five 5 years are a key SDG focus in Goal 2. This sharp focus on prevention is spot on. Longitudinal evidence from Young Lives and elsewhere bears that out and also suggests a second story that later changes in childhood matters too. After infancy some children falter, and others recover from early disadvantage and this change is linked with better cognition. Sustaining interventions from the earliest point in life, through childhood is important.

Third, building on this, adolescence as a critical window for development. There is growing policy interest in the situation of adolescents, as largest generation of young people ever come of age. From a scientific point of view, there is lots of evidence that adolescence is a second critical window of rapid change,  including related to nutrition. Current work within Young Lives identifies both a close link between maternal undernutrition and child undernutrition and identifies important changes in height status happening as late as middle or later adolescence (early evidence is presented in this Save the Children report). Again early is best, but it’s never too late.

Finally, school can be a platform for better nutrition. There is a virtuous circle here: better nutrition supports learning, and schools provide an important platform for delivery of other services for children. School feeding is a widespread form of social protection. Previous evidence has suggested important positive short-term effects (like increased school enrolment, as well as micro-nutrient intake), and Young Lives evidence shows a protective effect from the Indian Midday Meal Scheme. Much of the interest in the Young Lives data is in the extent to which post-infancy physical recovery happens, whether it matters, and how it can be brought about. It’s an old research trope but this is one area I’d like to see given more emphasis, research and innovative ideas about whether and how interventions across the life-course could bring about stronger child development.

Rio will emphasise the heights of human sporting endeavour. The aim of the Olympic movement is to promote a better world, where more of the world can take part on an even footing. Using the Olympics to promote child nutrition couldn’t be more appropriate.