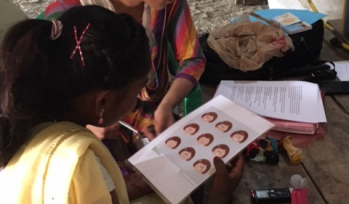 In Nepal, Save the Children and Georgetown University’s Institute for Reproductive Health (IRH) are piloting and evaluating a package of programs called CHOICES, VOICES, and PROMISES that seek to challenge and change restrictive gender norms among very young adolescents by intervening at the levels of the individual, the family, and the community. The programs were developed by Save the Children in Nepal, where there are high rates of early marriage and gender based violence.

CHOICES includes eight developmentally appropriate participatory activities to stimulate discussion and reflection among 10–14-year-old girls and boys on how:

In 2010, IRH evaluated the CHOICES curriculum to determine whether participation resulted in improved attitudes and behaviors related to gender norms. Findings showed statistically significant improvements in gender attitudes and behaviors between control and experimental groups after participating in CHOICES. Read the brief or recent New York Times piece to learn more.

Save the Children developed a series of 10-minute videos featuring community members speaking about how taking these actions makes them feel and how they overcame social disapproval around them. The videos are screened in the community on hand-held micro-LCD projectors with groups of parents whose children are participating in CHOICES. Following the video screening, parents take part in a facilitated discussion and reflect on actions families can take to improve gender equity in their households.

Finally, Save the Children developed PROMISES to change community norms related to child marriage and domestic violence, both of which have significant effects on gender equity. Through PROMISES, large posters are created and displayed on message boards in the community. Poster subjects include parents’ hopes and dreams for their daughters, lost opportunities for girls married early, and testimonies from women whose husbands treat them with respect, among others. When each poster is unveiled, a small group of identified community influencers discuss it and are then asked to share their thoughts on the poster within their social networks. Each poster is displayed for two weeks to stimulate dialogue and reflection at the community level.

In 2012, Save the Children evaluated PROMISES using structured interviews and focus group discussions with children and parents. The evaluation showed that the messages the posters contained were shared throughout the community, and that community influencers played a large part in facilitating dialogue. Following the intervention, husbands held more positive views of the ability of their daughters to contribute to the community and better understood the need for their daughters to be physically mature before marriage. Very young adolescents were more optimistic about what they could achieve in their lives and experienced more love and openness from both parents in discussing their hopes and dreams.

What will happen when all three of these interventions are implemented simultaneously in a community? Will addressing gender inequity at the individual, family, and community levels result in better outcomes for girls? These are key questions that IRH will answer with support from the RISING project. Field teams are currently interviewing children and parents in Nepal to provide baseline data to answer this question.

Brad Kerner is an Adolescent Sexual and Reproductive Health Advisor at Save the Children USA.

This blog originally appeared on The Population Council's blog on 20 August 2016.

Brad will be presenting a poster session,  Whose turn to wash the dishes? Evaluation of a Multi-level Intervention to Shift Gender Norms among Very Young Adolescents  at the Young Lives Gender and Adolescence conference on 9 September 2016.