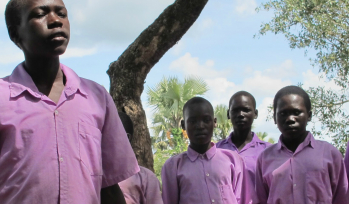 Representing half of the world’s population, youth are, as the song tells us, our future. But how are we  investing in that future? Are we focusing our efforts and resources to ensure youths’ health and well-being, and successful transition into adulthood?

To answer these questions, the Institute for Reproductive Health at Georgetown University teamed up with Search Institute to explore the links between individual and social ‘assets’ and sexual and reproductive health (SRH) of very young adolescents.

What are Developmental Assets?

Individual and social assets are the relationships, skills, opportunities, values, and self-perceptions that are considered important to a child’s health and development. These assets can be individual values and attitudes, such as self-confidence and a commitment to learning, as well as the social support and safe boundaries provided by parents, caregivers and communities. Search Institute has developed a way to quantify these assets in a questionnaire called the Developmental Assets Profile (DAP). This tool was developed in the United States but has been used across multiple regions globally and has provided consistently robust measures of developmental assets. The DAP covers eight asset categories and 52 items. Total asset scores are calculated for each respondent depending on their responses to the questions, with a total possible score of 60. Based on these total scores, respondents are ranked across four categories from highest to lowest scores: Thriving, Adequate, Challenged, and Vulnerable.

IRH developed a set of eight SRH indicators covering puberty and pregnancy risk knowledge, SRH services, access to attitudes about gender roles and expectations, teasing and bullying, and social support. These indicators were integrated into the DAP and adapted to the local context in Northern Uganda. We randomly selected 14 primary and secondary schools in Gulu district in northern Uganda to administer the survey among 1000 girls and boys aged 10 to 14.

Northern Uganda is a region that has been greatly affected by a 20 year civil war, which ended in 2008. Results of the extended conflict left the area with high levels of poverty and gender-based violence, limited educational and economic opportunities, deterioration of social structures, and separation of families.

What the survey said

We found out that individual and social assets are significantly linked to sexual and reproductive health outcomes. The majority of girls and boys, 61%, had scores falling in the two highest categories, Thriving and Adequate.  Almost a quarter of the girls as compared to 12% of boys report having supportive relationships. Similarly, 72% of girls have accurate knowledge of puberty as compared to only about half of boys.

Not only did the girls have better SRH outcomes than boys but of the 38 items that had significant correlations with SRH outcomes, 16 of them were for girls only and 8 for boys only. Assets measuring Commitment to Learning and Social Competencies were each significantly correlated with seven of the eight SRH outcomes (including condom knowledge, including knowledge that condoms can prevent HIV/can prevent pregnancy).

Girls who had scores at the Thriving and Adequate levels had:

Boys who scored at the Thriving or Adequate levels had increased odds of better health outcomes. These boys had:

What these results tell us is that individual and social assets matter a great deal in the future of our children. Developmental assets are important to health and development of both girls and boys, but especially for girls. We often neglect boys in our work, yet these results show that fewer boys have supportive relationships, adequate SRH information and access to services than their girl peers. To reach all adolescents, both girls and boys, it’s time to think outside of the traditional SRH program box and  implement programs that build the assets they need to successfully navigate puberty.

Kim Ashburn is a Senior Research Officer and Thomas Odong is Country Coordinator, Uganda, at the Institute for Reproductive Health at Georgetown University

Panelists Nana Dagadu and Rebecka Lundgren of the Institute for Reproductive Health at Georgetown University will discuss the importance of working with very young adolescents in a panel session, The Metrics of Growing Up, Developmentally-appropriate Approaches for Intervention and Measurement at the Young Lives Conference on Adolescence,Youth and Gender from 8-9 September, 2016.