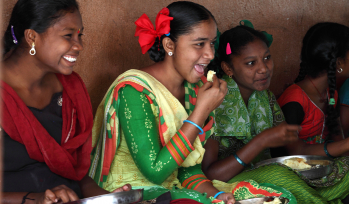 Nutrition has been described as a neglected crisis, but (thankfully) there is growing discussion on its profound effects for societies, families, and children. In particular, child stunting is the most common form of undernutrition globally with serious consequences for child development, human capital, and national social and economic development.

Much of the recent discussion around child nutrition has focused on the earliest period in life – the first 1000 days after conception, recognising that children who experience early deprivations may well not recover. There is no doubt that early prevention should be prioritized. But some questions arise: How to sustain early gains? Are there other (critical) periods when early undernutrition can be alleviated? Could adolescence be this critical window?

Several arguments have been put forth to suggest so. First, nutritional deprivations during adolescence, when growth is rapid, can have dramatic implications for individual health. And second, for girls and women, these deprivations are likely to be transmitted to their offspring, perpetuating the cycle of disadvantage. There is some suggestive evidence that adolescence may provide a second ‘critical window’ for nutritional interventions, but it is clear that more evidence is needed to establish this.

In a recent paper, that will be presented at the Conference on Adolescence, Youth, and Gender later this week (earlier analysis also informed a recent Save the Children report), we have used data from the Young Lives study to explore these arguments (pooling data from  the four Young Lives study countries). In particular, we looked at the relationship between the nutritional status and age at birth of mothers on the one hand with the outcomes of Young Lives children on the other hand. We also examined the possibility of recovery from stunting during adolescence among girls.

Our analysis shows that children of adolescent stunted mothers were at higher risk of being stunted and underweight themselves and had lower scores on quantitative achievement tests than children whose mothers gave birth to them after adolescence and were not undernourished. In the case of stunting and underweight, these differences persist through adolescence and after controlling for a range of factors. Children born to a stunted adolescent mother were 15 percentage points more likely to be stunted and 11 percentage points more likely to be underweight at age 1 year than children born to a non-stunted mother who gave birth after adolescence. These effects persist at similar size through age 8 and 12 years.

In the case of quantitative achievement, the differences persist through adolescence, but once other factors are accounted for they are dramatically reduced. This partly suggests that factors such as socioeconomic circumstances, linked with maternal undernutrition and early pregnancy can explain the observed link between these maternal circumstances and children’s development. Nevertheless, another explanation could relate to the nature of the sample, as the majority of mothers identified as giving birth in adolescence were 17 to 19 years old, and so we don’t rule out that being born to much younger mothers has significant negative consequences for child development.

Could investments in adolescent girls’ nutrition improve their later outcomes and that of their children?

To examine this, we are investigating plasticity of growth during adolescence, by documenting the prevalence of changes in stunting status and growth between 12 and 19 years of age (this analysis used a sample of girls from the Young Lives study observed in adolescence, as mothers in our analysis are only observed and measured in adulthood). If change happens during this phase, it follows that it may be possible to bring this about through effective interventions.

Our findings suggest that there is growth recovery between ages 12 and 19 years. In particular, we find that, on average, half of the height deficit experienced at 12 years (relative to a healthy growing reference of the same age as provided by the WHO), has been recovered by age 19. Moreover, the evidence seems to suggest that most of the change has realized between 12 and 15 years, and thus that early adolescence may be a more fruitful period for interventions aiming to tackle maternal and child undernutrition in low- and middle-income countries.

What are the implications?

Our analysis documents that nutritional deprivation of mothers has intergenerational consequences, especially for children’s physical development and that these consequences are expected to be exacerbated by early pregnancy. We also produce evidence of growth plasticity for girls during adolescence that may further indicate that part of a mother’s nutritional deficiencies at childbirth may have arisen during adolescence.

The million dollar question is whether (and how) one could bring about nutritional improvements during adolescence. This is a question that our analysis cannot answer directly, as this would require evaluating different nutritional interventions. But our analysis should provide the motivation for evaluations of the relative effectiveness of interventions, such as various forms of social protection, school feeding, and micronutrient supplementation for adolescent girls. These interventions may provide an opportunity for consolidating investments made in the early years, but also for remediation of early undernutrition in children that could not reached early. In other words, early is best, but it’s never too late.

Liza Benny will be presenting The Relationship of Maternal Nutrition and Adolescent Child-bearing with Child Development at the Young Lives Adolescence, Youth and Gender conference, based on a forthcoming paper with Andreas Georgiadis and Paul Dornan. The presentation is available on Slideshare.

Note: this blog was amended on 6 October to account for interim findings.