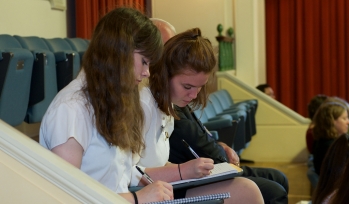 We started our day here feeling quite clueless to the subject matter of the Young Lives conference on ‘Gender, Adolescence and Youth’, not knowing what to expect from the experience and feeling very nervous. Our journey to Oxford was longer than many of the other visitors’ , as we travelled from the Isle of Wight.  However, despite our 5am start making us tired, it’s safe to say that the day was wholly worthwhile and will hopefully influence others about the importance of young people and their role in society.

We began our day with a lecture about gender norms and how they shape who we are. It was interesting to note the stark differences and similarities between each country, their views on masculinity and femininity and how each sex should behave. It’s worth noting that even though Ghent (in Belgium, one of the places studied) was far more advanced in accepting challenges to gender norms, it has taken them 30 years to reach this point and has taken generations to even slightly change because it’s still not that far advanced. We believe from this that it’s important to listen to young people and think about how we expect them to behave in society and not force gender roles upon them.

There were different studies on gender norms; one focused on what Shanghai and Delhi wanted their population to be like. It was interesting that Shanghai was more open to change, whereas Delhi had quite regimented gender roles. This could be because of the lower wealth in Delhi, or the higher education in Shanghai.  Perhaps education is the answer to the issue of harmful stereotypes and expectations on our young people?

One thing that really stuck out to us was the way that most of the gender roles were agreed on in most of the countries studied - one lecturer mentioned how it is like someone has made a script which every person who has influence over young people is following.

The study of gender norms has been invested in hugely (the research we have seen today is very extensive), yet we still don’t realise we are part of them, even when it’s quite clearly been pointed out. Having just passed the age range that was being studied, it was certainly significant to me to realise how truly these expectations shape us and our society. When we were given name badges at the start of the day, our first question was which side we should place them, as there was previously a rule dictating that men should wear them on one side whilst women should wear them on the other. This shows how ridiculous these ideas of gender can be: what does it matter which side a name badge is worn on? What does it matter which ways young people choose to express themselves, as long as they are happy?

We learned how these stereotypes are largely down to some people’s personal perceptions, and these can get passed on to others, making them the norm.

Later in the day, we got the chance to interview Prudence Nonkululeko Ngwenya, whose work as Head of the African Union Commission’s Youth Division was created due to the African government realising the importance of young people, and that the African population is 65% young people. This means that young people need to be educated on the importance of looking after each other and themselves, as they are key to the future of each state and the continent of Africa as a whole.

Prudence’s job involves working with all 54 African states, and she meets with the head of state of each at huge gatherings twice a year. It also involves lots of travelling around and helping young people from all over Africa. She talked about how HIV and AIDS are touchy subjects in Africa still, and how there was a lack of awareness about the disease because it is only relatively recently that it has become accepted as such a large problem. Her job entails educating young people in Africa about their sexual and reproductive health.

Prudence was a very interesting person to speak to. We were expecting quite a formal interview situation, but our time with her ended up more like a conversation. This put us more at ease and made the whole experience a lot more comfortable. Her down- to-earth attitude also made it better, and her openness was inspiring.

Our experience today has been very interesting and will perhaps be key in how we change. Maybe no longer being as oblivious to the issue of gender will have a bigger effect on ourselves. It was eye-opening to realise how affected we are by gender norms and the expectations of society upon us as women and young people as a whole.

Young Lives invited a number of Oxfam Youth Ambassadors to the conference on Adolescence, Youth and Gender on 8 and 9 September 2016. Read their other blogs here and here.