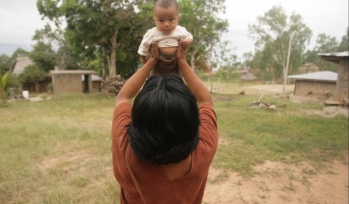 Peru has come a long way in its fight against chronic undernutrition in the last ten years: between 2005 and 2015, child stunting levels halved, from almost 30% to under 15%.

During the same period, severe stunting in rural areas reduced from almost 16% to just under 5%. What is more remarkable is that improvements have been observed in both urban and rural areas, and across all regions. All of this is good news for the country. However, it raises the question as to what is behind the substantial improvement in the nutritional status of Peruvian children.

There has been some discussion about this in recent articles in the Guardian and the World Bank’s Development Impact Blog, in particular highlighting the role of Juntos, the national conditional cash transfer programme. There are, however, other key elements that, in my view, need to be incorporated in order to explain this positive trend.

High rates of economic growth for a period of more than 10 years have been key to reducing monetary poverty and extreme poverty in Peru.

During the time the economy grew at an average annual rate of 6% (from 2002 to 2013), well above the average of the Latin American region, poverty reduced from 59% to 24%, and evidence shows that the former contributed to the latter, i.e. that economic growth was pro-poor . Put differently, among poor people there were improvements in household consumption, including caloric consumption (in real, per capita terms), and ultimately in resources available to satisfy health and nutritional needs of household members, mainly because income levels were higher. There is also evidence that living standard conditions improved in other dimensions. For instance, access to basic sanitation improved in the previous decade (e.g., see here), which is important to reduce infectious diseases, a common cause of chronic undernutrition.

But there is another reason why a relatively long period of economic growth at high rates has been important: by enabling the Government the fiscal resources required to increase social expenditure.

These two programmes have gradually expanded and to date reach a large part of the population in rural areas. It is known that the Juntos CCT had an impact on reducing poverty and on improving attendance to health check-ups among children under 5 years (Perova and Vakis, 2012; Escobal and Benites, 2012). Moreover, evidence shows that the Juntos program reduced severe stunting by between 8 and 13 percentage points and increased height-for-age Z-scores (by 0.13) among children under 5 years (Sanchez and Jaramillo, 2012; Sanchez et al., 2016).

While economic growth appears fundamental, it is unlikely the observed results would have been achieved had it not been for substantial improvements in the architecture of social policies.

Indeed, one important feature of Juntos is that it is adequately targeted: the “first wave” of the programme (between 2005 and 2008) benefited the poorest households in the poorest districts in the rural highlands.

In addition, a national, multi-sectoral strategy to fight undernutrition—supported by the national government, regional and local governments, civil society, NGOs, and international partners—was laid out a couple of years after Juntos started operating, and likely strengthened its impact. In 2007, the National Strategy for Poverty Reduction and Economic Opportunities (CRECER) was launched with the specific objective of reducing stunting by 5 percentage points in 5 years. In 2008, the Ministry of Economics instituted a results-based budgeting policy (Presupuesto por Resultados, PpR), that led to the creation of the Articulated Nutrition Programme (Programa Articulado Nutricional, PAN). PAN led to a well planned increase in health expenditure, including (a) vaccinations against diarrhea and respiratory diseases, and, (b) counseling about nutrition and hygiene added to the clinic visits for Growth Monitoring (Cruzado, 2012). In 2012, the Ministry of Development and Social Inclusion (MIDIS) was created. Essentially, MIDIS strengthened the policies mentioned above (CRECER was replaced by Incluir Para Crecer, a life-cycle strategy to fight poverty), and there was a further targeting of the poor population in the Amazon rain-forest,which until then had not been reached. For more discussion on these factors see this recent Lancet paper , this chapter from a book edited by IFPRI and this by Alcazar .

To sum up, the substantial reduction in chronic undernutrition observed in the last 10 years has been the result of multiple causes.

Economic growth almost certainly played a direct role, and this is more obvious when the fact that  that stunting also reduced significantly in urban areas (from 17% to just under 10% between 2007 and 2015), typically not reached by anti-poverty policies, is taken into account. Economic growth had also an “indirect” effect by providing the fiscal resources required to implement better social policies. Juntos and SIS paved the way to reach the poor population in rural areas, and the implementation of national, multi-sectoral strategies (CRECER, PAN, Incluir para Crecer) made it possible to provide health services specifically designed to improve the nutrition of children under five and pregnant women. It cannot be overstated how important complementarities across programmes are: for the Peruvian CCT to work, health services had to be free for the poor (SIS), and for Juntos and SIS to reduce stunting, health services offered in poor districts had to be of good quality, and oriented to improve child nutrition.

So, did the CCT Juntos reduced stunting by a half in Peru?

Juntos alone could not have done it, just as better health services alone—without an adequate targeting and incentives—, and/or higher income levels alone, would not have done it. It was the combination of factors (economic growth, a platform to reach the poor population, and a national, multi-sectoral strategy) which actually helped achieve this extremely positive result.