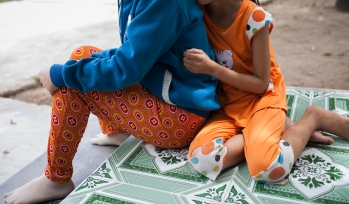 A couple of years ago the view of the perfectly terraced rice paddy fields of Viet Nam from my airplane window seemed both beautiful and unnerving.

Like most Americans of my generation the violent conflict that engulfed this region in the 60’s and 70’s still evoked powerful feelings. I was on a UNICEF mission to Hanoi to help set up a study on the drivers of violence. Viet Nam was included in the study to represent the East Asia and the Pacific Region, complementing three other countries: Italy, Peru and Zimbabwe which together comprise the focus nations of the UNICEF Innocenti Multi Country Study on the Drivers of Violence Affecting Children.

The Multi Country Study is now a multi-national team of UNICEF offices, Governments, and research partners such as Young Lives, determined to understand what drives violence and what can be done to prevent it.

I had been forewarned that undertaking rigorous work to gather evidence on a sensitive issue like violence affecting children in Viet Nam would be challenging. I found a UNICEF Hanoi office full of hardworking, experienced child protection specialists eager to allow me to join them in an exploration of why so many children were at risk of suffering emotional, physical or sexual violence.

I also found a Government more than willing to discuss violence prevention and willing to make this important topic a priority. They immediately established a steering committee and set out to form their national research team.

Viet Nam is a proud country—and it should be: it has survived not only a war (the American War, as they gently remind me), but also life under a rapidly changing socio-economic context. In 1986, the government introduced a package of economic reforms known as Doi Moi, or renovation, which transformed the previously planned, vertically oriented, largely agricultural economy into a market system which opened up trade to the rest of the world.

In 2013, Viet Nam officially became a lower middle-income country with a highly diversified economy and per capita income of almost $USD 2,000.  That’s progress by most development indicators, the kind of progress often marked by the premature retreat of foreign assistance and donors.

The effects of Doi Moi were not only economic; the opening of the economy has exposed the country to new ideas and attitudes. With Doi Moi, traditional values have shifted, including concepts of gender equality. Migration, largely a feminized phenomenon in Viet Nam, has accelerated as women seek better options for their families.

But with this rapid growth comes the inevitable companions of poverty and inequity, creating a sometimes toxic mix for children who need protection. These are the things we have been studying—the drivers of violence—and  ultimately one of the key lessons from our study is that violence prevention can’t be tackled in isolation from a deep understanding how a country’s history, politics, and economics shape a child’s experience growing up.

But with this rapid growth comes the inevitable companions of poverty and inequity, creating a sometimes toxic mix for children who need protection. These are the things we have been studying—the drivers of violence—and  ultimately one of the key lessons from our study is that violence prevention can’t be tackled in isolation from a deep understanding how a country’s history, politics, and economics shape a child’s experience growing up.

The Government of Viet Nam has done much to document and mitigate these effects, including targeted programmes for family well-being and specifically for children. But challenges remain in a country which almost four decades later is still struggling to heal the wounds of a traumatic war.

In general, there are higher rates of disabled children in the areas of the country that were more heavily sprayed, as well as in areas where there are current dioxin hotspots. The causation is still unclear. However, we do know with certainty that children with disabilities face a significantly higher risk for all types of violence.

Even for Vietnamese children elsewhere in the country, violence is an everyday issue made worse by intense family pressure to succeed. Evidence from Viet Nam shows, for example, that children who are violent at school are often from families where they experience physical or emotional violence from parents, caregivers or siblings.

These children tend to be quick to anger, see others as aggressive, and use violence to solve disagreement. Violence in the home shapes and determines children’s personalities, peer networks and environments.

Breaking the cycle of violence is critical. Early interventions must be timely. For instance, evidence from Viet Nam shows that children who report violent physical discipline at age eight, have poorer cognitive outcomes, poorer math scores, lower self-esteem and lower self-efficacy in adolescence than their non-abused peers.

Experiencing violence in schools was children’s number one reason for not liking school. In fact, teachers’ use of violence against students is a significant cause for school dropout in Viet Nam. That’s discouraging for a country with aspirations to continue to grow its economy and secure its place as a regional leader.

Despite important advances, Viet Nam’s child protection system currently remains nascent and lacks the necessary resources to address the complex and interrelated drivers and risk factors of violence affecting children throughout the country. After two years of research it’s clear today that the national solutions to violence are not only possible but already underway.

On a recent visit, the Director of Children’s Affairs in our study’s lead Ministry introduced our research to colleagues as a “scientific study with a very different kind of approach”.

That sort of willingness, to grapple with what drives violence, is exactly how social change begins. During the same workshop the Director proudly announced that a new law had been passed making implicit the link between children’s experience of violence in the home and the school. Evidence generated from our Multi Country Study’s findings helped shape the law—and because of it, new prevention efforts are likely to be more effective.

It’s progress like this, in a place where the uptake of evidence is historically slow, that makes our work so meaningful.

Read more about our research with UNICEF on the drivers of violence.

This “YouthSpeak” video interviews Vietnamese children and youth working on ending violence in their communities. It includes Young Lives data from the Multi Country Study on the Drivers of Violence.