Learning more with every year? Estimating the productivity of schooling in developing countries 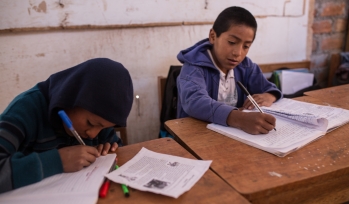 Despite massive increases in school enrolment in developing countries, learning levels have lagged behind. But the range in average student achievement is large: In the 2012 PISA assessment (of 15-year-olds), Vietnamese students got higher scores than those in the US and the UK, but Peru ranked last (OECD 2012). The magnitude of the gap between these two developing countries was 1.4 standard deviations (SD); for comparison the difference between the US and Finland was 0.38SD.

My job market paper answers the question of how much of this gap reflects differences in the productivity of the schooling systems, as opposed to other factors such as nutrition, early childhood shocks, or endowments – a critical policy question relevant to the substantial education spending around the world.

Using unique panel data with comparable tests, I first establish that there is little difference between the ability of Peruvian and Vietnamese students before they enter school, at age 5. By the time these students reach 8 years old (in grade 2 or 3), a massive gap of 0.75 SD opens up.

This gap applies across the entire distribution of students, as the figure below illustrates. The left panel presents a mapping between percentiles of the Peruvian and Vietnamese distributions at 5 and 8 years of age --- for all percentiles of the Peru distribution, their relative standing to Vietnam is worse at 8 than at 5, indicating substantial divergence. The right panel looks at the dynamics of achievement, plotting the relationship between scores at age 5 and scores at age 8. Across the distribution of achievement, Vietnamese students do much better at 8 than Peruvian students with identical initial scores.

To read the rest of this blog go to The World Bank's Development Imapct blog where this first appeared on 15 December 2016.