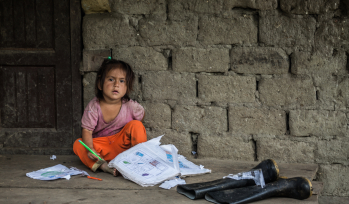 It has been widely recognized that poverty is a key variable to explain why over 200 million young children from low and middle income countries do not develop at similar levels as their non-poor peers. Time and again our research shows that being poor is often associated with many other health and social problems that make it hard to get out of poverty.

But the good news is that there are also protective factors in the environment where children live that can mitigate the effects of these risk factors. Identifying these risk and protective factors has been an important area for research over the past few years, with immediate implications for policy work.

Recently, the International Journal of Behavioral Development has dedicated a special section to study these factors. The collection of studies cover a variety of topics in different regions of the world. Below we present a summary and brief discussion of six of the papers that relate to children below the age of six years.

First, there are three studies that concentrate on studying pathways and mediators using descriptive data.

For children aged between 6 and 42 months in Bogotá, Colombia  Marta Rubio-Codina and colleagues found that the large gaps between top and bottom wealth quartiles in several areas of development were reduced mainly by parental (especially maternal) education and the quality of the home environment.

Florencia Lopez Boo used data from the Young Lives study to try to disentangle which variables mediated in the explanation of gaps between high and low socioeconomic status children in Ethiopia, India, Peru and Vietnam. She found that some mediators significantly reduced the gap, but these varied across countries. For instance, while residing in an urban area reduced the gap in India and Peru, the education of the caregiver was a key variable in Ethiopia, Vietnam and India. Attending preschool was a significant mediator, but only in Ethiopia and Vietnam.

Moving beyond descriptions to test for interventions, Heather Knauer and colleagues found that a parenting programme in Mexico, introduced in the context of a conditional cash-transfer program, increased the number of parent-child play activities (in particular, reading storybooks and singing), which in turn had an impact on children´s development.

In Ethiopia, Tassew Woldehanna also used Young Lives data to study preschool attendance and impact on development. He reports that only a quarter of preschool –aged children attend this service. As in many other countries, attendance is associated with wealth, parent education, area of residence and region of the country. Considering all other variables, Woldehanna found that attending preschool had a positive impact on tests of vocabulary and mathematics at age eight.

In the final study in this issue of IJBD, Wachs, Cueto and Yao, explore theoretical and empirical models to explain mediation between poverty and development. We present evidence from 52 countries, using  UNICEF’s  Multiple Indicator Cluster Surveys (MICS) to suggest that the usage of single variables (e.g. maternal education) in mediation models may be of less value than cumulative risk models (i.e. models that identify simultaneously the presence of risk and promotive factors), at least for low- and middle-income countries.

The reason for this is that risk factors tend to be present simultaneously for many children, thus increasing the chances that their development is compromised. Examples of risk factors we use are physical punishment, child illness, lower physical growth and inadequate sanitation at home or in childcare. At the same time, the presence of promotive or protective factors may diminish the harm of the risk factors. Examples of promotive factors are participation in education programs, availability of toys and books for children at home, high maternal education, vaccines and nutritional supplements. The analysis is complex however, given that the analysis would need to incorporate not only the interplay between risk and promotive factors, but also the age of the child and the intensity of risk factors.

Overall, the above papers suggest some pathways to look more deeply at what specific characteristics of the environments the children grow in seem amenable for interventions, so that all children have a fair chance to fully develop their developmental potential. In doing so however, these papers show that interventions need to consider the specific context in which children live and grow.