What does 'bargaining power' mean to young married rural women in Ethiopia? 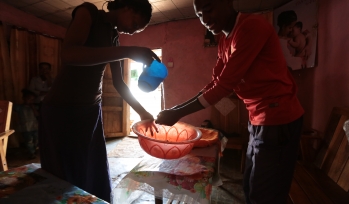 I notice that in the lead-up to this year’s International Women’s Day, a popular hashtag on social media is #SheDecides. This is clearly linked to campaigning for women’s decisions around family planning but of course goes beyond that be a rallying call for funding and enabling those choices. It reminded me that though clearly decision-making at a global level has a huge impact on women’s lives and opportunities, so too does decision-making at the most local level: one’s own home. I’ve recently written about this most personal level of #SheDecides - ‘bargaining power’.

In 2014, Ethiopia ranked 129 out 188 countries in the Gender Inequality Index. This is despite the government’s commitment to improve the social standing of girls and women, and the considerable number of programmes targeting different aspects of gender inequality, from early marriage to women’s job creation, as well as attempts to change local cultural belief systems.

One concept that has been used to understand gender inequality, primarily from the field of economics, is that of ‘bargaining power’. Bargaining power is explained as negotiations between members of a household to arrive at decisions regarding the household unit. The basic premise is that men and women have different roles and priorities when it comes to household decision-making, and that decisions are made through a bargaining process in which household members each attempt to use the resources they have to achieve their desired ends.

Bargaining power could be argued to be a domestic issue – what happens behind the family door, between a wife and husband. But policymakers care about the bargaining power of women because of its direct correlation with different life outcomes. It is not enough to provide women with access to opportunities, services, or information, if they are powerless to act due to social and economic constraints. Increased bargaining power has been correlated with better outcomes in terms of health and education, and of the clothing of children and other members of the household. It has also been shown that women who wield greater influence in household decisions can greatly improve their children’s nutritional status.

My new working paper examines the ‘bargaining power’ of young married Ethiopian women within their marriage and their household. The paper is based on interviews with a group of young women, now in their early 20s who participated in the Young Lives longitudinal qualitative research over a seven-year period (from 2007 to 2014) spanning pre- and post-marriage, and for some of them, pre- and post-childbirth. By age 19, one in six young women in the Young Lives sample were married. I examined the changes in their bargaining power by comparing their experiences before and after marriage.

For these girls gradually settling into a new life before deciding to have their first baby was not an issue. All of them lacked their own income and they were not well-educated, factors that had they been otherwise, might have caused them to delay having a child. Many young women feel pressured by family to get pregnant soon after marrying. The young women spoke of couples decided together, yet husbands’ opinions influenced the outcomes. Beletch’s husband said,“I discussed with my wife to have a child early. She agreed with my idea. As a result, she did not use contraception. We planned to have the first child and then create gap to have the second.”

The discourse suggests it is a couple’s decision, but it may often be that it is up to the woman to ‘agree with’ the man’s idea.

Two of the young women in the study, Haymanot and Sessen, were not using any form of contraception when they got married because of lack of accurate information and knowledge about options.  They both become pregnant soon after their marriage. Sessen said, “I heard about contraception from some women who gave birth and from health workers at the health centre.” She also told us she had no relevant information regarding giving birth, despite the health centre for pre-natal check-ups. Fortunately her delivery happened on the day she went for her last check-up. Had it not overlapped on the day of her check-up, she would have given birth in her mother’s house with the help of traditional birth attendants. Haymanot also gave birth at home through the help of traditional birth attendants because she was afraid of going to the health centre.

Haymanot’s decision-making power was very limited. Though she wanted to delay having a family for up to five years, her husband and her mother insisted that she should have a baby as soon as possible. Also Haymanot has mentioned to us that she would like to have three children but her mother wants her to bear six or seven children.

Across all our interviews, it’s clear that husbands, mothers, and in-laws are the major actors in decisions around having children. Haymanot’s story (you can find more detail in the working paper) points to a recurring theme in young women’s narratives of bargaining power – whereas the constraints brought on by marriage may vary, the birth of a child consistently constrains agency such that the margins for bargaining become even narrower.

The transition to parenthood results in more profound changes in the division of labour between couples compared to most other life-course events.  Since women are the main carers for children we found there is little scope for negotiation between the couple, and as men assume the breadwinner role, women’s paid work and education take a backseat to their mothering responsibilities.

In all cases, the young women gave up paid work after they married, with the husband being the only wage-earner. It’s also worth saying that there are no girls who are able to combine schooling with marital life in the rural sample.

This is a very brief snapshot of our qualitative research on marriage and parenthood. In conclusion, it's important to highlight that poverty clearly plays a role in the bargaining power of these young women. And though in some instances they tried to maintain their agency, in many cases this was restricted by the persistent local norms and obligations within their societies which reinforce their dependency on their husbands. ‘Bargaining power’ involves the young women not only bargaining with those around them but with the existing traditional system in which they live.

Policies aimed at helping women exercise gender equality in marriage and even before marriage have to consider the household level factors, individual level factors, and the wider perspective of community level factors that shape the bargaining power of women.

Lastly, relationships matter. Policies aimed to empower women must also work with/for those who have a stake in limiting or enhancing women’s agency, including their mothers, husbands, other relatives and community members. Otherwise #SheDecides is a meaningless catchphrase.