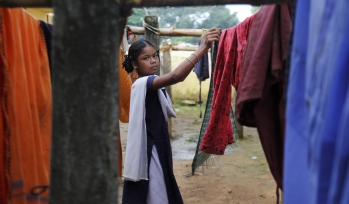 Across the world, too many women and girls spend too many hours on household responsibilities – typically more than double the time spent by men and boys. They look after younger siblings, older family members, deal with illness in the family and manage the house.

One of the proposed solutions is to ‘Share unpaid care!’ with men, and to invest in technology, infrastructure and services to reduce the care burden on women.

Similarly, in ‘Sharing the Load’ briefing, the Gender and Development Network argue that unpaid care work is connected to virtually every aspect of women’s economic empowerment – impacting women’s time for paid work, education and leisure, and their economic decision-making power.

Girls are increasingly being brought into this important debate, as in Unicef’s report on Harnessing the Power of Data for Girls highlighting gender inequalities in children’s household chores - worldwide, girls aged 5-9 and 10-14 spend, respectively, 30 per cent and 50 per cent more of their time helping around the house than boys of the same age.

Too often though, girls are subsumed in the category ‘women and girls’, wherein girls’ experiences and points of view are commonly overshadowed by a focus on consequences and solutions for women. If we want to understand and address patterns of gender inequality in adulthood, we need to cast greater attention on how these patterns start to emerge in childhood – in particular, during the second decade of life (‘adolescence’) when gender inequalities widen and amplify.

With my colleague Patricia Espinoza, I have been using the Young Lives longitudinal data set to explore changes in time-use patterns across childhood and into early adulthood in four low- and middle-income countries. We’re interested in: how unpaid care work is distributed within households; the backgrounds of children who take on greater unpaid work responsibilities; how children balance unpaid care work with schooling and paid work; and the meanings that children give to their various household contributions. In our forthcoming paper, we focus on patterns occurring between the ages of twelve and nineteen, as in the two examples provided below from the older cohort of children.

Time allocation by girls and boys on different activities on a typical day in Ethiopia and India , in minutes (click on country for full graph).

These simple graphs reveal a lot about children’s time-use. First, we see that overall, children in Ethiopia spend more time ‘caring for others’ than in India, although by age 19, Indian girls spend the most time ‘caring for others’ – unsurprising perhaps since by this age 37% of the girls in India had married and of those who had married 57% had become mothers. Second, the time spent in caring and in household chores differs between girls and boys from the age of 12, and these differences widen at the age of 19. Third, boys spend more time compared to girls on unpaid farming and herding and in the family business. And fourth, by age 15, boys are spending more time, compared to girls, in paid work, and by age 19 the gender gap widens dramatically.

Qualitative interviews with children and their parents and caregivers go deeper into how decisions are made and negotiated around boys’ and girls’ time-use, and how their roles and responsibilities adjust in response to changes in household circumstances, such as parental illness, job loss, or when an elder sibling leaves home.

Triveni and Bhavana, both twenty years old, are two of the girls we’ve been interviewing in India since 2007. From their narratives, we see how ‘care’ is wrapped up in so many other aspects of their evolving biographies.

When she was first interviewed, age 12, Triveni and her sister were living on their own, on account of both their parents having died. Their grandmother maintained a caregiving role though she lived separately. The girls shared household responsibilities, earned money and attended school. By age twenty, Triveni (whose sister had married) was living with her grandmother. She had missed several classes since she was taking care of her grandmother who was recuperating after being attacked by a dog.

Nobody else is there, [I] felt I have to take care. I did not go anywhere… I was in the house… washing the wound with soap three times a day, giving medicine.

Triveni said she came to appreciate the fragility of life, and when her grandmother scolded her for missing classes Triveni responded, “If I go, who will look after you?”

Unlike Triveni, Bhavana left school after Grade 2 when her father died. Each year, she accompanied her mother and brothers on their seasonal migration to Mumbai in search of work. At first, her job was to prepare food for the family, then she began working laying roads and in construction. Age 16, she had taken on most of the housework at home, and complained that her sister-in-law contributed very little.

In Bhavana’s eyes, unpaid care work was about more than simply getting a job done. Learning to work ‘properly’ – whether at housework or in the fields – would help her avoid problems with future in-laws. She explained,

by the time we go to our husband’s house, we must have learnt all these things… if we don’t know these works…. they might say ‘What work do you know? What work have your parents taught you?’… so we have to learn now.

Her hope was that by gaining a reputation for being a skilled homemaker and hard worker she would marry into a good family and her workload would be reduced. In reality, after marrying, aged 16, life was much the same; as she put it, “It’s only a different place now.”

Both girls’ experience of unpaid work can only be understood in connection with other aspects of their life experiences, including parental death, illness, migration, paid work and schooling, all of which played out in the context of their relationships, specific gender norms and the material realities of poverty. They were, at different times, both the recipients and givers of care.

‘Economic empowerment’ for young women like them can seem like a pipe dream. We don’t yet know whether their hard work will result in decent work in the coming years.

Targeting interventions exclusively at women and men in efforts to redistribute unpaid care work won’t go far in reducing gender inequality across the life course.  For many women (and men) induction into paid and unpaid work occurs earlier and is a common feature of childhood. We need to take a closer look at the essential (though hidden) contributions made by children to their households. This includes improving understanding of boys’ care worlds, about which we know little, and the impact of their unpaid work on their economic outcomes. Likewise, we need research into the effect of girls’ unpaid care work on their longer-term trajectories toward accessing decent work.

Over the coming year, Young Lives longitudinal research aims to contribute to filling in some of this picture.