The ethics of secondary data analysis: respecting communities in research 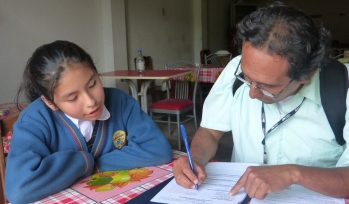 I have been involved with Young Lives for the last ten years and it has been an amazing experience and a great privilege. As well as being Deputy Director since 2011, I have been ‘embedded’ in Young Lives as the ethics lead – though it is vital that ethics are not the responsibility of one person, but shared across the whole team.

Young Lives encounters all kinds of ethics questions and dilemmas, but for a recent guest blog for the National Centre for Research Methods,  I was asked to explore the ethics of secondary data analysis.

Arguments about the promises and pitfalls of archiving (qualitative) data are well-rehearsed, as outlined in discussions by Natasha Mauthner and others.

A few years ago, our qualitative research team had a very productive and enjoyable collaboration with colleagues at the Thomas Coram Research Unit in London and  Family Lives and Environments, (at the University of Sussex) as part of Novella (Narratives of Varied Everyday Lives and Linked Approaches), in which Young Lives qualitative data formed the basis for narrative and thematic analysis of children’s and their families relationships to the environment in India (Andhra Pradesh) and England (see Catharine Walker’s thesis).

Based on our experiences, we produced a working paper exploring the ethics of sharing qualitative data,– and we identified a number of challenges, which we hope have helped other researchers as they grapple with the demands of sharing data.

We argued that sharing data and undertaking secondary analysis can take many forms, and bring many benefits. But it can be ethically complex. One of the considerations that we discussed was responsibilities to participants and to the original researchers, and the need to achieve a contextual understanding of the data by identifying and countering risks of misinterpretation. We highlighted the importance of developing and maintaining trusting relationships between research participants, primary and secondary researchers.

Novella involved a team of qualitative researchers, and we did not fully discuss the ethics of secondary analysis of survey data, bar touching on questions of informed consent. But one of the questions that I’ve long been concerned about, based on experiences at Young Lives of seeing research based on our publically-archived survey data being used in ways very far from the intentions of our study (which is to explore childhood poverty over time), is the following: how do the people we study and write about, feel about the interpretation and use we make of their data?  Might they object to how their data are used, and how they are represented in research findings and other media dissemination?

So I was fascinated to learn about the EU-funded project, entitled TRUST, that has led to the generation of the San Code of Research Ethics, launched by the South African San Institute a couple of weeks ago (this video gives a great insight to the project).

The San Code of Ethics calls for respect, honesty, justice and fairness, and care – and asks that the San Council, which represents the San Community, is involved in research from inception, design, through to approval of the project, and subsequent publications. The San are not the only indigenous people to create codes of ethics demanding they are fairly respected in research, and the impetus for this initiative has come from genomics research, but the points about respect are relevant for all research. Two points are worthy of much more attention in research ethics:

The technicalities of all of this may be challenging, but demand our attention, so that open, honest, and continuous communication can take place, and the hurt caused by lack of justice, fairness and respect can be avoided in the future.

An earlier version of this blog first appeared on the website for ‘Working Across Qualitative Longitudinal Studies: A Feasibility Study Looking at Care and Intimacy’  on 29 March 2017.