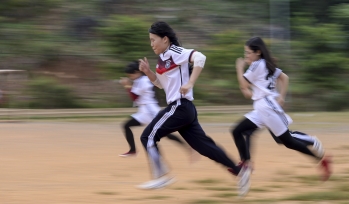 This week, Caine Rolleston and Padmini Iyer presented key findings from the 2016-17 Young Lives Vietnam school survey at a seminar organised by SEAMEO RETRAC in Ho Chi Minh City, and at a launch event organised by the Centre for Analysis and Forecasting, Vietnam Academy of Social Sciences (CAF-VASS) in Hanoi (for updates, see #YLEducation across social media).

In this blog post, we summarise key findings from the survey in three priority areas for upper secondary education in Vietnam: transition to Grade 10; the development of 21st century skills, and the experiences of ethnic minority students. More details about the survey design and methods are available via the Vietnam 2016-17 school survey report, and our full presentations from this week’s events are available via SlideShare.

Who makes the transition to upper secondary school?

Comparing the characteristics of Young Lives children who were enrolled in Grade 10 in 2016-17 and those who were eligible for Grade 10 (i.e., 15 years old) but out of school in the same year we find that girls, those with more educated parents, and those from wealthier households are more likely to be enrolled, and ethnic minority students are less likely to be enrolled. However, when controlling for prior ability (which is an important consideration, since students usually need to pass an entrance exam to access upper secondary school in Vietnam), ethnic minority status is not a significant predictor of being enrolled in Grade 10. This suggests that ethnic minority status does not additionally affect children’s chances of making the transition to Grade 10, but lower test scores among ethnic minority students may reflect disadvantage earlier in the education system.

Overall, this indicates that access to upper secondary education in Vietnam is not as equitable as at earlier stages of education. In an equitable system, in which access is purely determined by merit, we would not expect wealth nor degree of parental education to be significant predictors of access when controlling for prior ability.

In the 2016-17 Young Lives school survey, student performance in Maths and functional English was assessed to be at one of four levels: ‘low’, ‘intermediate’, ‘high’ and ‘advanced’ (we’ll be sharing a technical note detailing this benchmarking process soon). In problem solving and critical thinking, students were determined to have ‘emergent’, ‘basic’ or ‘competent’ skills based on their performance. We considered students performing at high or advanced levels in Maths and English, and students with competent problem solving and critical thinking skills, as those who could effectively apply their skills in higher education contexts and the ‘21st century’ labour market.

In problem solving and critical thinking:

Following Vietnam’s performance in the Programme for International Student Assessment (PISA) 2012 and 2015, we are not surprised to find high levels of performance in Maths among Vietnamese students in Grade 10. However, there is a mixed picture on whether Vietnamese young people are developing relevant skills for the 21st century labour market. The majority of students only have basic or intermediate functional English skills, and while our findings on problem solving and critical thinking indicate that students in Vietnam are not just rote learners, only a small proportion of students are competent in these areas.

How are experiences of upper secondary school affected by ethnic minority status?

Ethnic minority students make up around 13 per cent of the survey sample, and the majority of these students are attending schools in the Young Lives sites in Lao Cai, which are also the most disadvantaged sites in the sample. We find that ethnic minority students in these sites have markedly different experiences of upper secondary schooling compared to majority Kinh students. In particular, they are more likely to live away from home during term time, and they are more likely to drop out of school during Grade 10.

Overall, what can we learn from these findings?

Education for the 21st century:

Leaving no one behind in Vietnam: