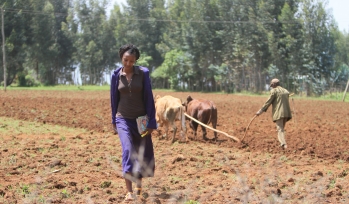 Children in Ethiopia start work at an early age and continue to try to balance work and school as they grow up. By following children from birth through adolescence, Young Lives provides evidence on changing patterns of work and school, highlighting differences including those associated with gender and poverty.

In comparing two cohorts of children born seven years apart (a Younger Cohort born in 2001 and an Older Cohort born in 1994), Young Lives is able explore these trajectories of work and schooling across the life course of individuals, but also comparing the experiences of two groups of individuals growing up at different times. In this blog, I highlight some key findings and insights on children’s experiences of work in Ethiopia. A useful starting point is noting how the balance of school and work has changed over the time, with children of our Younger Cohort having much better access to school and spending less time on work as compared with our Older Cohort. Other insights include:

Decreasing involvement in work for pay, but burdens remain

For the Young Lives children in Ethiopia, work starts in early childhood. By age 5, children already worked for the household, and by age 7 they were routinely combining work with school. By age 8, over 90 per cent of children were involved in some form of work but were also spending more hours in school, a trend that increased by the ages of 12 and 15.

Across both cohorts, most of the work undertaken by children was unpaid and the proportion of work for pay decreased. For the Younger Cohort 8-year-olds (in 2009), the proportion working for pay decreased from almost 10 per cent of Older Cohort individuals at the same age (in 2002), to less than 1 per cent. By age 12, the proportion similarly decreased from almost 13 per cent (of Older Cohort children in 2006) to just over 10 per cent (of Younger Cohort children in 2013). Although these are encouraging trends, they disguise the increase in more demanding and potentially hazardous forms of work. For instance, in areas with stone crushing plants and irrigation systems, children were increasingly involved, sometimes spending as much as 6 hours per day in associated paid work.

Across both cohorts, girls were more likely to be involved in care, domestic and unpaid work. They faced a greater work burden in the home, including cleaning, cooking, care for younger siblings, fetching water and wood, going to mills and markets, and some working in fields or daily labour. Boys, meanwhile, were more likely to be engaged in work for family businesses, farms, and in paid work.

Among poorer households, particularly those affected by drought in rural areas and inflation in urban areas, and especially those facing family problems such as death or illness of caregivers or loss of livestock, children were more likely to drop out of school, girls often to care for sick family members and boys to look after livestock. Surprisingly, the overall drop-out rate of boys in primary school was higher than for girls, who were often more able to combine work with school, but at a cost of more time spent working before or after school, affecting their homework and overall performance. The most common reason for girls not attending was to look after siblings followed by costs of schooling.

The Young Lives school survey in 2016-17 found that almost a quarter of children had repeated a grade and 17 per cent had ‘dropped out’ of school at some stage. Some children, especially those from poorer households and those who faced family difficulties, encountered serious problems in trying to combine work with school. This was the case for Senayit who, when in Grade 5, worked on vegetable farms to buy school materials and coffee for the family when her parents were ill and shared: “I think about them while studying: this definitely affects my learning”. However, as in Senayit’s case, at age 12 few households reported that children had permanently left school. Much more common were repeated periods of absence, lagging behind the appropriate grade for their age (so being classified as ‘over-age’ students), and inability to concentrate because of hunger or worries about the home situation and the need to take on additional responsibilities.

Young Lives found evidence of high parental aspirations, with 77 per cent of parents of Younger Cohort 12-year-olds in 2013 wanting their children to go to university. However, children and parents may be discouraged by poor quality schools, and students facing difficulties keeping up may stop attending regularly, repeat grades and lag behind. At age 12 about half of children in the Young Lives Ethiopia sites failed to reach the achievement benchmark for fourth grade children.

Moreover, some parents expressed concerns about the relevance of what children were learning for obtaining jobs, and decreasing confidence in education as a means of escaping poverty. Others were discouraged by pervasive violence. At the age of 8, three-quarters of Young Lives children in Ethiopia reported witnessing a teacher administering corporal punishment, often for absence or arriving at school late. However, there were also signs that schools can be accommodating of the needs of families, with examples of flexibility at peak agricultural periods of harvesting by adopting half-day shift schooling, and teachers providing extra tutorials for missed classes.

Banning the worst forms but acknowledging benefits of benign work

Some types of work are clearly incompatible with school, are harmful to children’s wellbeing, and are rightly prohibited as exploitative. Ethiopia has ratified the International Labour Organization Convention 182 and included it in its National Action Plan to Eliminate the Worst Forms of Child Labour. Moreover, when children work too many hours this can have a detrimental effect on their schooling, and some work may lead to injuries (most reporting was of minor cuts).

However, some children’s work can be benign or even beneficial, and child contributions may be vital for household survival, particularly among the poorest families. Moreover, children are often proud of their contributions, and gratified by praise and blessings from their caregivers or from God. We also found some children paying for their schooling through their work, buying exercise books, stationery and clothing. One girl in a rural village stated: “If I didn’t have a job, I couldn’t have attended class”. Some older children also supported their siblings’ education, such as Gedion, who migrated from a rural area to the capital city, sold lottery tickets and sent money to his parents to buy clothes and school materials for his younger siblings.

Legislation on the worst forms of work needs to be implemented sensitively by engaging communities and families in protecting children. At the same time, promoting children’s wellbeing and development requires an integrated approach which addresses the broader social and economic contexts in which children’s school and work are part of their lives. Social protection can play a key role in addressing family poverty and adverse events and should focus on age- and gender-specific risks to reduce the need for children’s work and provide insurance against vulnerabilities. In particular, measures addressed at reducing pressure of care work should be prioritized to relieve the burden experienced by girls. Moreover, promoting flexible learning arrangements can enable children from poor backgrounds who need to work to continue with their schooling.

To further explore our findings on children’s experiences of work in Ethiopia and across the other Young Lives study countries of India, Peru and Vietnam, please read our summative report just out: Responding to children's work: Evidence from the Young Lives study in Ethiopia, India, Peru and Vienam, see our related data visualizations here and follow #YLChildWork on social media for updates.