Thinking about Care and Unpaid Work: Family lives in the Global South 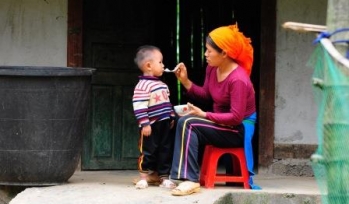 Today’s observance of International Women’s Day celebrating ‘the social, economic, cultural and political achievements of women’ is prompting us to blog about our thinking on gender, feminism and social norms.

Coinciding almost perfectly with this day of celebration, yesterday saw the launch of Feminism and the Politics of Childhood: Friends or Foes?  book in which we have a chapter on ‘Care Labour and Temporal Vulnerability in Woman-Child Relations’. Ours is one of 19 chapters that set out to critically explore the relationship between feminism and the politics of childhood, and the perceived commonalities and tensions between women and children.

We focus on ‘unpaid care work’ since it is a topic of global concern with respect to the wellbeing of both women and children, but also one that positions women and children in relation to care and to each other in particular ways.

We set out to do two things with the chapter:

Over recent decades, feminism has inspired multiple, overlapping strands of academic research into care and unpaid work, much of this developed solely through the points of view of women. Our chapter is influenced by feminist scholars who sought to resolve the tensions between ‘care’ and ‘justice’ by recasting care as a fundamental concern based on shared experiences of vulnerability: that we are bound together by care since we are all at risk of being dependent on others at various points in our lives.

The figure of the child remains ever-present in feminist theorisations of care, yet somehow secondary, reflecting the tendency of feminist approaches to emphasise adult gender relations and women’s identities and interests. There is still little recognition of the children’s agency within care relations and, what is more, children are still pictured as dependents and in need of care.

On the other hand, contemporary childhood studies recognise children’s agency in their development and in their social worlds. While these studies did not develop a distinct set of care theories (comparable to those by feminist scholarship), numerous studies provide insights into children’s diverse care worlds and their unpaid care labour.

The empirical part of our chapter (available here) looks at inequalities and the wider structural factors that contribute to care disparities across the life course and between generations. We have used data from Young Lives: a study that has collected survey and qualitative time-use data from 4,000 girls and boys growing up in diverse communities across Ethiopia, India, Peru and Vietnam, from the time they were 12 years old into their early twenties. A selection of the children and their families were also interviewed every few years as part of a longitudinal qualitative study.  We tapped into this rich, multi-generational, longitudinal data set as a basis for engaging with the more theoretical questions posed by the book.

The longitudinal perspective allows us to trace gender differences in children’s unpaid care work across childhood. The following graph clearly illustrates how the amount of time that girls spent on unpaid care (on a typical day) increased across adolescence, whereas there was a decline or small increase for boys.

It is easy to see how the kinds of gender disparities that are evident in early adulthood have their roots much earlier, in adolescence.

The longitudinal qualitative data also allowed us to look at the way in which unpaid care work was organised within families and households, and the kinds of things that affected changes in girls’ and boys’ roles and responsibilities, and how they experienced their work.  Girls and boys in our study, and in many parts of the world, contributed unpaid work and care labour to their families, sometimes from as young as five and six years of age, with their responsibilities increasing and becoming more gender-differentiated as they matured.

For example, Elmer’s family based in Peru understands responsibility for, and structure of, care and work as reciprocal and shared between the generations. From the age of 12, Elmer and his elder brother moved between their village – where their parents lived – and Lima (country capital) where their elder sister lived. Elmer and his brother alternated providing childcare for their sister’s children, in exchange for their subsistence and schooling in the city. In this scenario, the image of the adult caregiver and child care-recipient does not gel.

The reality is that the majority of the world's children are active co-participants in the care, welfare and constructions of family life. Childhood in many societies is seen as a time to contribute work rather than to be shielded from it.

At the same time, there is another face to the mirror: the crushing effects of poverty, parental illness and injury on adults’ capacities to care for the young means that children’s caring and unpaid work roles may also reflect family fragility and hardship, making it difficult for children to balance their responsibilities with schooling and leisure.

Shared concerns of women and children

Our chapter draws on feminist theory and insights from childhood studies to bring women and children into the conceptual frame of care. We argue that recognition that we are all vulnerable in our dependence, but not in the same way, nor at the same time, stimulates analysis of political concerns around ethics, inequality and justice. Attention to temporality – of the life course and of intergenerational relations – goes some way towards integrating questions of care with concerns for justice for all.

Follow us on Twitter @yloxford to see how we’re making International Women’s Day and watch this video in which we reflect on the research, writing and contents of our chapter: