Who is taught by the ‘most effective’ teachers? Identifying unequal patterns of school effectiveness in India

In the past decade, India has seen a dramatic increase in enrolment at both primary and secondary levels of schooling. Policies introduced as part of the Right to Education Act in 2009 have helped children from all backgrounds to attend school, with the greatest increase in enrolment seen among girls, children from disadvantaged social groups, and those in the poorest households – many of whom are ‘first generation learners’.

Yet alongside this positive trend, studies suggest that the Indian education system is subject to vast inequalities in learning outcomes with some children benefitting from education equal to the best schools in many OECD countries, while others appear to have little chance to learn. With education, and perhaps particularly secondary education, thought to be key to breaking the intergenerational transmission of poverty, this raises real concerns that the already wide inequities found within the school system will continue to deepen over time.

This week we launch two reports which look at some of these issues in more detail. The reports make use of data from two recent Young Lives education studies in India - a large-scale school effectiveness study and a smaller classroom observation sub-study – to explore questions of school and teacher effectiveness, and consider how these relate to underlying patterns of inequality and disadvantage.

Through this analysis, we find that children are ‘sorted’ into more or less ‘effective’ schools according to their background. Using ‘value-added’ [i] analysis of school effectiveness data collected from children in Grade 9 in 2016-17, we find that girls, children from poorer families and those with less educated mothers are more likely to attend schools where less learning takes place. Figure 1 shows this pattern in terms of student socio-economic background, revealing that the poorest children attend schools which, on average, add considerably less value than those schools attended by the least poor children. These differences persist even when we control for variations in student background which may impact on opportunity to learn (this is ‘conditional value-added’, shown in the red bars in Figure 1).

Analysis of data from Young Lives’ 2017-18 Classroom Observation study in India provides further evidence of this trend. Using data on the scores attributed to each teacher using the CLASS observation methodology [ii], we find that teachers categorised as having a low score (i.e. those not found to be demonstrating positive teacher-student interactions) are more likely to teach children from disadvantaged backgrounds, such as those with less educated parents or those from poorer families. Figure 2 shows one example of this, revealing that more than 80 per cent of students in classes taught by teachers who have been given a low CLASS score have mothers with no education, compared to just 40 per cent of those taught by those teachers with higher CLASS scores. 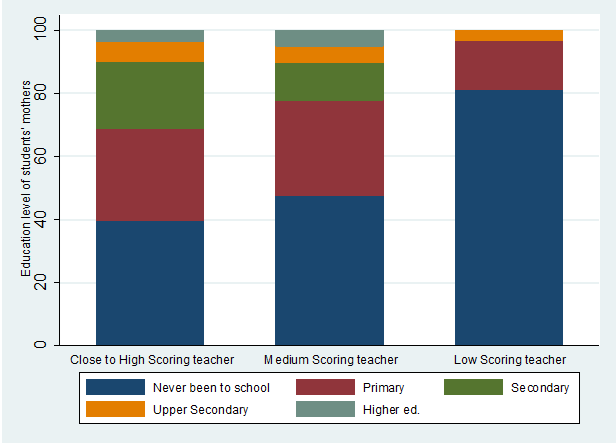 Although we need to remember that issues of confounding in school type, location, and student background data prevent us from inferring too much from these descriptive patterns, these analyses suggest that India’s unequal education system is leading to a ‘double disadvantage’ for some students, who face disadvantage at home and in terms of school quality. This raises real concerns that, rather than challenging existing inequalities and inequities, the education system is instead likely to lead them to deepen over time. Our findings in these reports indicate the importance of identifying policy solutions to address the issue of ‘sorting’ which leads disadvantaged children to attend less good schools, if all children in India are to be given the opportunity to achieve at least a basic level of learning and these inequalities are to be addressed.

This blog highlights some of the findings from two reports published by Young Lives’ education team this week. These are: Young Lives School Survey, 2016-17: Value-added Analysis in India; and Classroom Observation Sub-study, 2017-18: Evidence from India. The analysis discussed in this blog was undertaken in collaboration with Ana Grijalva and Caine Rolleston. For related research findings and updates from Young Lives, please follow us on Twitter @yloxford.

[i] Value-added is a measure of student progress over a defined period of time. It is designed to compare ‘like for like’, by looking at student progress compared to other students with a similar starting score. ‘Unconditional value-added’ is estimated using student test scores from the beginning and end of the school year. ‘Conditional value-added’ also includes student background characteristics, to take into account that it may be harder for some students to make progress.

[ii] CLASS is the Classroom Assessment Scoring System. This classroom observation tool was developed by Robert Pianta at the University of Virginia. CLASS has been used in many different countries to measure teacher-student interactions in the classroom; the Young Lives Classroom Observation sub-study is the first time this methodology has been used in the Indian context. For details of the design of the Young Lives’ 2017-18 Classroom Observation sub-study in India, please find our technical note here.