Why care about unpaid care work in East Asia? 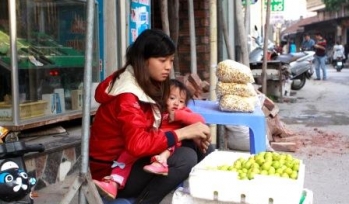 An increasing body of evidence shows that women’s domestic roles in the household limit or orient their participation in the labor market in East Asia. Descriptive evidence from household surveys in Indonesia, Mongolia and the Philippines shows noticeable dips in female labor force participation during childbearing years. A more detailed analysis of panel data from Indonesia confirms this trend and demonstrates that it is at least partially driven by constraints, not women’s preferences.

Women who have access to informal childcare arrangements, notably those living with older family members who can help take care of children, tend to have higher labor force participation. In urban areas, these women also return to work nearly two years sooner after giving birth than new mothers without access to informal childcare. Access to formal childcare arrangements also boosts women’s labor force participation in Indonesia. In addition to the benefits of early childhood education, access to public preschools can alleviate the childcare burden. Indeed, a recent EAPGIL study in Indonesia causally demonstrates that an additional public preschool per 1,000 children in the district increases the employment of women with age-eligible children by 13.3%. While women’s preferences certainly influence their labor market decisions, the link between facilitated access to childcare and labor force participation means that constraints also drive decisions, at least for some women.

Not only does unpaid domestic work influence whether or not women participate in the labor force, it also drives women’s choices in terms of the type of work that they do. After childbirth, women without access to informal childcare arrangements in Indonesia often switch into unpaid family work. However, those with easier access to informal childcare do not make this switch in urban areas, and the switch is only temporary (about one year) in rural areas. Lack of childcare arrangements is also associated with a switch to less lucrative sectors of activity—from manufacturing to retail work in urban areas and from manufacturing to agricultural work in rural areas. These transitions translate to a decrease in annual earnings of US$255 in urban areas and US$319 in rural areas (see here for more). A recent study in Vietnam also makes the link between women’s domestic roles, occupational choices, and earnings. It finds that occupational sorting is one factor explaining the gender wage gap in Vietnam, and the primary driver of occupational sorting seems to be that women choose occupations which offer better non-monetary benefits such as paid leave, social insurance or shorter working hours. These types of benefits are important when trying to balance paid work with unpaid domestic responsibilities.

As discussed above, there is evidence that the need to balance market work with unpaid domestic work can contribute to lower female labor force participation, the gender earnings gap and women’s engagement in less productive types of work. Finding ways to alleviate the unpaid domestic burden on women would equalize the playing field, ensuring more equitable economic opportunities. Beyond the intrinsic value of gender equitable economic opportunities, employment choices based on skills rather than gender have important implications for productivity. Reforms aiming to increase female labor force participation could increase potential growth by 0.2 percentage points on average during 2018-2027. Moreover, earnings gaps can have implications beyond productivity, influencing bargaining power within the household and voice in the community. For example, lowering the gender wage gap can reduce violence against women. Moreover, in rapidly aging economies like several of those in East Asia, increasing women’s labor force participation is an effective policy alternative to offset the declining workforce.

What can be done about it? Policymakers have several tools to help alleviate some of the domestic work burden or to facilitate gender-equitable economic opportunities. One promising policy option is to promote the availability, quality and affordability of public and private childcare services. There are several options for how to implement such policies, and the most appropriate solution is likely to be context specific. Governments may also need to have different policies for different regions or for urban and rural areas. Options may include free, government-provided childcare programs, public subsidies for private childcare provision, supporting community-based childcare facilities, or promoting employer-provided childcare programs. In the context of rapidly aging economies in many parts of the world, including in East Asia, policymakers should also consider the need for policy solutions for elder-care needs.

Beyond improving access to care services, policies that encourage employers to offer flexible working arrangements to their employees can help. Options like home-based work may also increase performance and employee satisfaction. When implementing flexible working policies in their institutions, employers should also consider what types of shifts in company culture may be needed to enable workers to feel comfortable and not penalized for using such arrangements.

Other promising policy options include those that may encourage a more equitable distribution of domestic work in the household. Programs engaging men in discussions about norms and care work can increase the time they spend on unpaid care work, decrease intimate partner violence, and increase women’s decision-making power in the household. Finally, policymakers can implement programs, such as the development of transportation or water infrastructure, that would help reduce the time needed to complete domestic tasks or to access paid employment.

Here at EAPGIL, we are continuing to explore and rigorously test different policy options to enable women to participate equally in the labor market. Stay tuned for new lessons from our ongoing work on the impact of rural roads, improved cookstoves, and employer-provided childcare on women’s employment and time-use.