No longer children: On growing up and the changing world of work 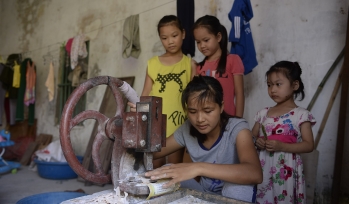 Over the past 15 years, Young Lives has followed the lives of two cohorts of children through childhood, adolescence, and into young adulthood. The information gathered in the last round of data collection (in 2016) permitted investigation of how the experiences of poverty early in life affect the opportunities of the Older Cohort children as they enter adulthood. Our latest report No longer children: What do Young Lives children do when they grow up? documents the trajectories of these children into post-secondary education and the labour market. It also explores access to productive jobs and sketches a profile of those individuals who have had the smoothest transitions through education and the labour market. Marta’s latest blog offered an initial insight into this report, so we turn in detail, now, to some key findings.

The four Young Lives study countries provide a varied picture of how young people transition into work and/or education across settings and levels of economic development; Ethiopia is a low-income country, India is lower-middle income, and Peru and Vietnam are upper-middle income countries. Nevertheless, across the four countries we observe some common patterns. In this blog, we focus on the commonalities found while also paying attention to country-specific issues. Although the Young Lives samples are not meant to be nationally representative, they are informative of living conditions in each of these countries.

Educational outcomes have improved overall. When comparing the two cohorts of children, school enrolment substantially increased across all countries over the study period, while starting school at the normal age and normative grade progression also became more common in all countries. Nevertheless, Ethiopia still faced late-age entry into education, along with slow grade progression, resulting in delayed educational trajectories for children still within the education system. 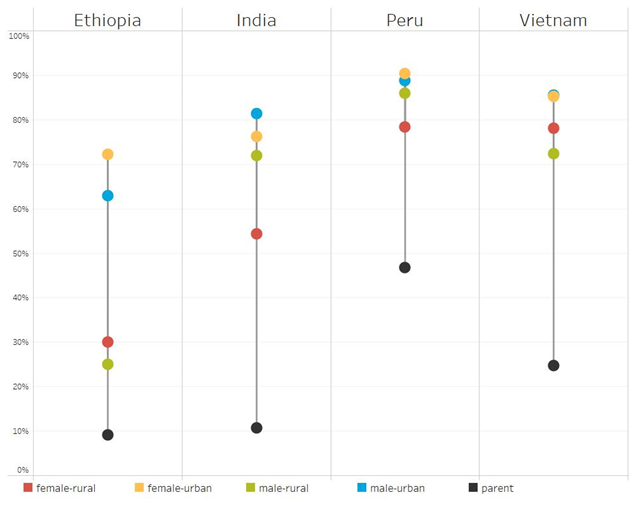 Nevertheless, it is worth highlighting that socio-economic gradients persist in all countries, particularly in secondary education completion rates and enrolment in, and completion of, university. Similarly, when comparing the Younger Cohort with the Older Cohort at age 15, gender gaps in secondary completion have reduced over time but remain sizeable (except for in Peru where a gender gap is observed, but only in rural areas, representing a small fraction of the sample population). Likewise, gender gaps in enrolment in post-secondary education at age 22 (Older Cohort) are observed in all countries but Peru (in favour of males in India and of females in Vietnam and Ethiopia).

Through our analysis, we find that young people’s opportunities in education and the labour market largely depend on their life experience as children and adolescents. Young people (age 22) who grew up in better-off families are more likely to enrol in post-secondary education, spend more time in full-time education, be better prepared for the labour market, and get better jobs. On average, youth who were only studying came from richer and better-educated families. They (and their parents) had high educational aspirations of themselves (of the child) from a young age.

Cognitive skills (numeracy and literacy) and non-cognitive skills (self-esteem and self-efficacy) are the other two main predictors of access to post-secondary education and labour market participation. Young people who are only studying at age 22 tend to have better cognitive and non-cognitive scores. Youth combining work and study were similar to this group, except they came from poorer families. Those who stopped pursuing education and were solely working by the age of 22 could be seen as antithetical to those who continued in education. They grew up in economically disadvantaged families, had lower educational aspirations, a poorer cognitive and non-cognitive profile and more of them were married/cohabited or a parent by age 19.

Overall, labour force participation (LFP) is high across all countries by age 22 with a substantial increase between ages 19 and 22, signalling a transition out of education into the labour market. Young men start their transition from education to work earlier than women, and LFP is generally higher for males than females in all countries except Vietnam. By the age of 22, a large proportion of individuals (between seven and nine out of 10 depending on the country) are employed, and overall inactivity is quite low with substantial differences across gender. In all countries, women are more likely to be inactive than young men and while young men are inactive due to studies,  early family formation and fertility is often the reason for inactivity and for neither being in employment, education nor in training (NEET) among women, particularly in India.

Most of the employed young labour force work as dependent workers, and increasingly so as they grow up, in all countries except Ethiopia, where self-employment is prevalent (Figure 2). 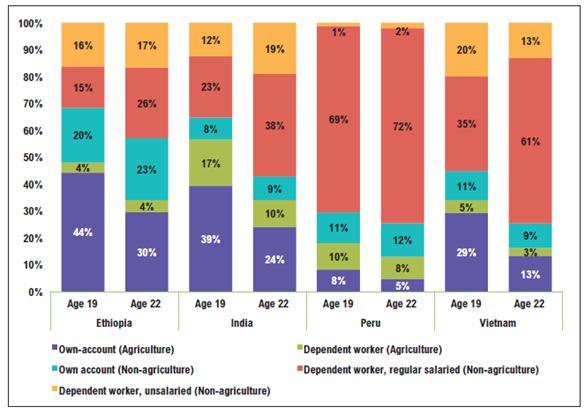 As they grow up, young people across Young Lives study countries tend to shift from agricultural to non-agricultural work, potentially implying migration to urban areas in the search for greater labour market prospects.

Overall, dependent workers (usually waged work) are more educated, have grown up in urban areas, are from better-off families and typically belong to smaller households as compared with own-account (independent) workers. Despite this, their working conditions are poor. Most of the youth in our sample have to work in more than one activity, and usually work more than 48 hours per week. Work commonly entails some form of hazard and few dependent workers have written contracts (Figure 3). Vietnam is the exception, given the strict regulations and the role played by public-owned enterprises, with about six out of 10 workers having a written contract and an equal proportion entitled to receive social security benefits. 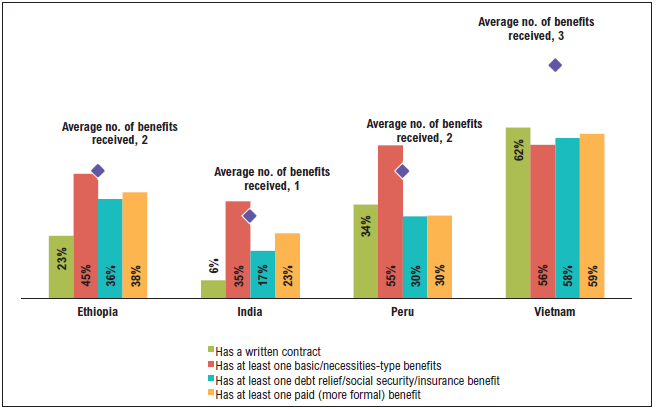 In the final sections of our report, we posit two questions on mismatches; in skills acquisition and the realisation of childhood aspirations. On skills, we find that about 20 per cent of youth in our study undertook some form of training in the past three years. This is relevant, as it provides an opportunity through which those that are not able to attend post-secondary education can continue accumulating skills. However, whether or not these skills acquired  through training match labour market demand should be further investigated. Work by Cueto et al. (forthcoming) discussed in a recent blog show that there are large inequalities across and within countries in terms of accessing and using digital technologies, suggesting the presence of a digital divide. This is especially worrying when we see this overall shift away from agriculture into more urban work, which may require more extensive ICT skills.

On aspirations, we find that from an early age, children across all countries aspire to complete university but few are able to realise their dreams. Nevertheless, significant differences in aspirations exists across genders and country contexts. Interestingly, aspirations are lower for girls in Ethiopia and India, while the opposite is true for Vietnam. Furthermore, children from the poorest families tend to have lower aspirations than their peers. In the process of consolidating their aspirations, the children filter and dismiss unattainable options based on their expectations and experiences, and there is an overall downward adjustment in such hopes between the ages of 12 and 15. In Ethiopia and Peru, this downward trend continues after age 15, whilst in India and Vietnam there is a `U-shaped’ trend indicating growing aspirations after age 15.

Figure 4: Percentage of children aspiring to complete university across time 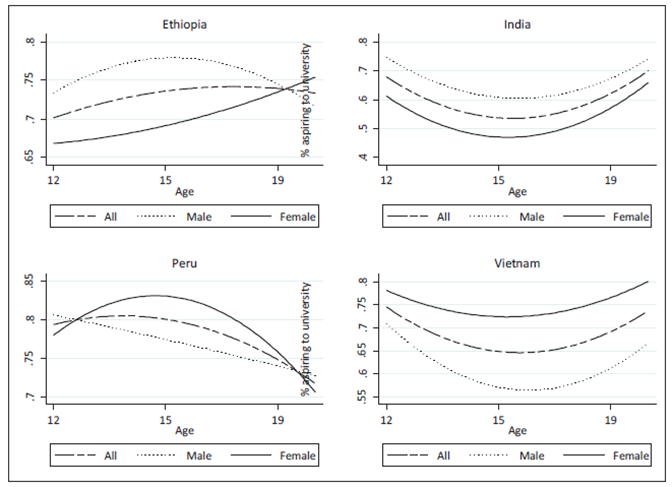 This is a snapshot of what Young Lives children do when they grow up, based on our full report available here. The report offers in-depth analysis of the school-to-work transition and different trajectories Young Lives children follow. To explore these insights in a different format, take a look at our interactive data visualizations on skills and work. For updates, follow #YLLabourMarket on Twitter @yloxford.