Guest Blog: Violence is present in all parts of children’s lives – so how to respond? 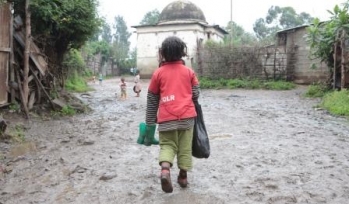 I was delighted to attend the Young Lives conference this June, where I joined the panel to discuss child protection and how we can best support young people.

As Plan International works to protect and uphold children’s rights, focusing in particular on adolescent girls, the subject matter and discussions throughout the day were close to my heart.

A harsh and pervasive reality

We know that violence remains a harsh and pervasive reality in children’s lives. In 2017, the Ending Violence in Childhood: Global Report by the Know Violence Initiative highlighted that, in the previous 12 months, at least three in four children had experienced violence.

All too often, this has devastating consequences – with estimates that, globally, a child dies every five minutes as a direct result of violence.

Typically, girls face higher levels of violence across diverse contexts than boys, and gender inequality and harmful patriarchal norms play a huge role in the ways that violence is perpetrated and experienced, as well as in the responses to it.

These dynamics have been highlighted again through some of our own research, which I shared during the panel.

We’ve been undertaking a longitudinal study called Real Choices, Real Lives since 2007. Through our qualitative approach, we’re tracking the lived experiences of 142 girls across nine countries, from when they were born until they turn 18 in 2024.

Hearing directly from the girls and their families, we understand their lives in the context of the social norms that influence their choices, decisions and realities.

How violence is experienced by girls

In 2017, we took a closer look at how violence is experienced by the girls in our Real Choices, Real Lives study.

By the age of 11, 91% of the girls in our study reported that they had experienced some form of violence. This was compared to 62% of the girls reporting violence in the year previously – a 31% increase in just a year.

As the girls have entered the critical period of early adolescence, their mobility and visibility is increasing, they are spending more time away from home and their social networks are expanding.

Alongside this independence comes a risk of increased violence but, importantly, also an increased perception of the risk of violence, with implications for all aspects of their lives at home, in school and in the community.

For many of the girls, their experiences of violence are underpinned by the fact that they are increasingly seen as ‘sexualised’ as they approach puberty and start menstruating.

Often, incidents of groping, name calling, and cases of rape were said to have been committed by ‘older men’ – as one teenage girl in Brazil reported “girls face more risks in the streets, because men and thieves find it easier to assault girls or rape them.”

This has a direct impact on the girls’ ability or willingness to access public places – and families often limit the spaces where girls can go.

Experiences of violence at home and at school

At home, girls increasingly experienced violent discipline when they ‘behaved badly’ or ‘went against gender roles’ – for example, if they moved too far from home, or played with boys.

Again, this was often linked to families’ perceptions of dangers in the wider community. "If mom sees me having fun with the boys she beats me, saying 'Have you ever seen the girls playing with the boys?'" Gastine, from Togo, explained.

Many of the girls also expressed fears of violence on the way to, as well as at, school, including by teachers.

This risk was linked to a reluctance to attend class in some cases – with this being expressed from a young age. For example, in an earlier round of data collection Walidatou, aged 7 at the time, from Togo said: “I prefer staying at home, helping my mother, to going to school…[because] the teacher sometimes beats me and that makes me sick.”

At school, peer-to-peer violence, increasingly male-against-female, led to girls responding by separating themselves from boys, and families telling their daughters not to be friends with boys.

A comprehensive approach to child protection

So, how do we respond? Our experience shows us that violence is present in all parts of children’s lives and is highly gendered. As a result, we must have a comprehensive approach to child protection systems to address this.

Plan International’s Champions of Change for Gender Equality and Girls’ Rights programme facilitates girls and boys to consider how unfair expectations and negative masculinities affect them, and how they can support gender equality and their right to live free from violence.

Our Girls’ Education Challenge in Sierra Leone has introduced a scorecard activity that allows girls, school personnel and community members to explore issues that affect girls’ sense of security in school – girls describe these activities as crucial to their sense of wellbeing.

Hearing others’ insights, as well as sharing perspectives from our research and programming, I was struck again by the need to consider child protection issues within the context of the systemic challenges facing children, and especially girls, growing up today.

We must also make sure we hear from children and young people themselves, to inform and advocate for policy and programming responses.

By doing so, we can support more gender transformative, child-friendly governance activities that include girls and boys as key actors in their own protection.

Find out more about the Real Choices, Real Lives study on the Plan International UK website.

This is the first in a series of guest blogs reflecting on the ‘Young Lives, child poverty and lessons for the SDGs conference’. Tanya Barron, Chief Executive Officer, Plan International UK, authors this blog.